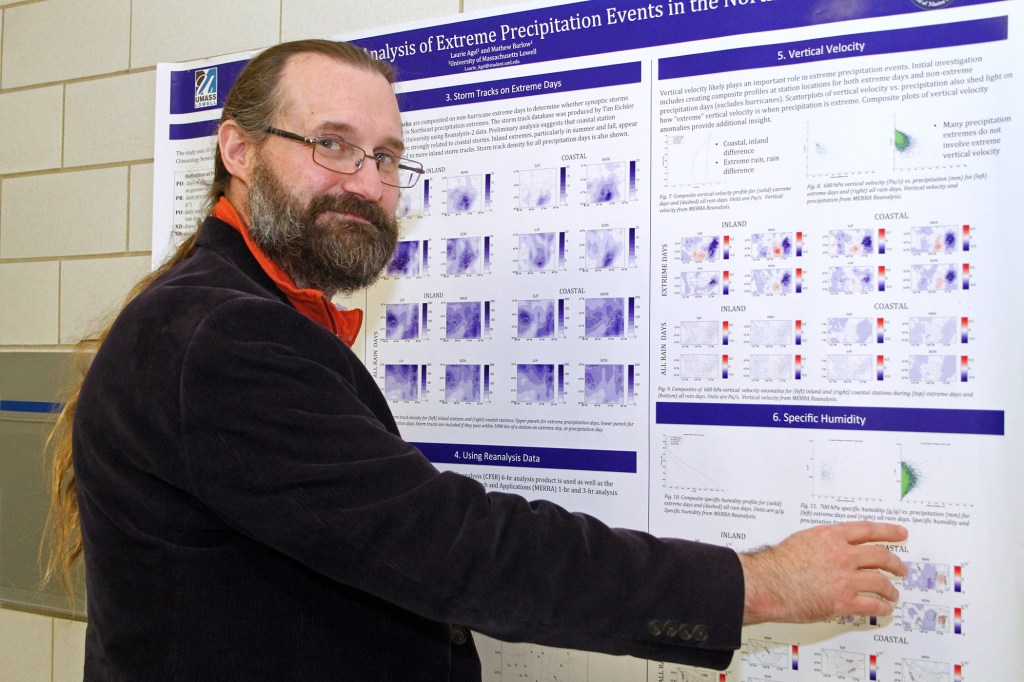 LOWELL — As wildfires continue to ravage the West Coast, UMass Lowell researchers analyzing the reasons behind hot and dry conditions hope their work will offer greater understanding of extreme weather events across the country.

UMass Lowell Professor Mathew Barlow and Assistant Professor Christopher Skinner, both of Medford, are examining why heat waves and droughts occur in the U.S. Northeast, along with the relationship between the two weather phenomena. The faculty members teach in the university’s Department of Environmental, Earth and Atmospheric Sciences and conduct research in its Climate System Dynamics Group, which studies how disturbances in the environment influence climate and weather events.

Funded by a $478,000 grant from the National Oceanic and Atmospheric Administration, the researchers’ project is the first of its type to be conducted in the Northeast, according to Barlow.

“Our goal is to better understand the physical factors and weather patterns that cause hot and dry weather, and how much hotter it can get when it’s dry and how much drier can it get when it’s hot,” he said. “We hope to learn how well we can predict this kind of weather and how much more often we might experience it in the future.”

Using moisture-tracking techniques and computer-aided modeling, the researchers are working to understand, simulate and predict the region’s heat waves and droughts, along with how the two extremes interact with each other.

Climate change plays a role, they believe, and the team wants to find out more about how. Last year was the second-hottest year on record for Earth with the average temperature across the globe 1.71 degrees Fahrenheit above the 20th-century average. The hottest year, 2016, exceeded that average by 1.78 degrees Fahrenheit, according to NOAA and NASA data.

“Increasing temperatures and dryness with climate change are important factors in the West Coast wildfires. In New England, we’re also experiencing increasing temperatures and will likely experience an increase in the strength of droughts, although not necessarily an overall drying trend like the West Coast. Here, our strongest droughts will likely get drier but our wet periods will also likely get wetter,” Barlow said.

In order to predict these droughts, the team will look at how the region’s rainfall develops as a result of environmental changes in a variety of places.

“Some rain comes from water that evaporated from the ground in the Midwest, some from the mid-Atlantic states, some from the Atlantic Ocean and some comes all the way from the Gulf of Mexico,” Skinner said. “We’ll be looking at which of these regions is most important for rainfall and droughts and examine whether climate change may alter the relative importance of these regions. For example, can a drought in the Midwest increase the likelihood of dry, hot conditions in the Northeast? Will a warmer world make the Northeast more or less dependent on certain geographical regions for rainfall? These are questions we hope to answer,” he said.

Similarly, the team will examine the conditions that give rise to heat waves.

“While temperatures in heat waves are always hot, the humidity can vary quite a bit,” Skinner said. “Just as we will identify the sources of precipitation for the Northeast, we will also determine the main sources of moisture in our region’s heat waves.”

Other members of the research team include UMass Lowell postdoctoral researcher Laurie Agel of Centerville, along with environmental studies graduate students Allison Hannigan of Delhi, N.Y., and Tyler Harrington of Somerville. Both Hannigan and Harrington credited the expertise and enthusiasm of the researchers in their decision to pursue their advanced degree programs at the university.

Barlow and Skinner believe the research methods they develop in this project could be applied to the study of other weather events in other regions of the United States. The work builds on other research launched by Barlow in 2016 and funded by the National Science Foundation to study extreme rainfall in the Northeast.

“This new NOAA project is a natural extension of that NSF award, to look at the opposite extreme of weather phenomena,” he said.