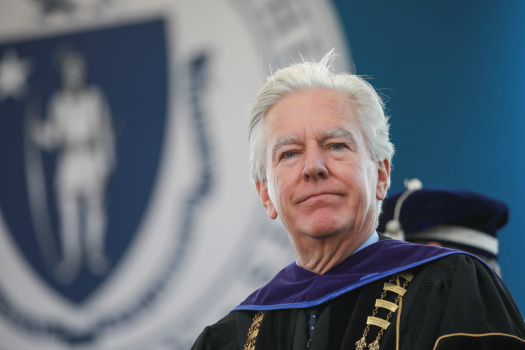 Facing a $335 million budget shortfall this fiscal year, University of Massachusetts officials on Tuesday outlined the steps they’re taking to prepare for an uncertain future, including some staffing cuts that encountered pushback from union representatives.

Each of the four undergraduate UMass campuses — in Amherst, Boston, Dartmouth and Lowell — made the decision this summer to reopen for the fall semester with a mostly remote model and with a limited number of students living on or otherwise accessing campus. Those numbers range from a combined 1,300 resident and commuter students at UMass Boston to a total of 3,470 resident and commuter students at the flagship Amherst campus.

At a pair of trustees meetings Tuesday, UMass system officials said the campuses’ moves to remote instruction were prudent, but that the resulting loss of $72 million in expected room and dining revenue exacerbated a pandemic-driven budget gap.

“Each of our campuses made difficult decisions, cognizant that we are likely facing a multi-year challenge,” Meehan said. “Layoffs have been a last resort, but each of our chancellors has worked with the union and non-union employees in the spirit of shared sacrifice to minimize the number of layoffs. In many cases they have negotiated agreements and replaced layoffs with furloughs and pay cuts, which have enabled many employees to keep their health insurance, and to keep their jobs.”

Lisa Calise, the UMass senior vice president for administration and finance, said the anticipated shortfall of $335 million represents more than 10 percent of the system’s $3.3 billion budget.

“The COVID pandemic does not come with a timeline for when things will return to normal, and there’s still significant uncertainty for us as we manage through FY ’21,” Calise said.

She said better enrollment figures than originally projected — instead of a 5 percent decline, actual enrollment is tracking half a percent below the prior year — are contributing $23 million in revenue, but $291 million in expense reductions are needed to balance the budget.

Those cuts, according to figures presented Tuesday, include almost $161 million on the workforce side — a mix of leaving vacant positions unfilled, a voluntary separation incentive program, short-term furloughs, salary reductions, temporary layoffs or long-term furloughs, and permanent layoffs.

The combination of furloughs, temporary layoffs and permanent layoffs add up to a total staff reduction of 16 percent across the campuses, Calise said.

According to UMass, the 141 permanent layoffs and 1,616 indefinite furloughs account for about $40 million, or 14 percent, of the total projected expense reductions.

The meeting was held remotely, and the Massachusetts Teachers Association said Tuesday that UMass union members planned to directly message trustees “about the impact of cuts on campuses resulting from the trustees’ budget.” Three union representatives also addressed the board during its public comment period.

Verena Lisinski, chair of the Educational Services Unit at UMass Dartmouth, told the trustees they had “forced our leadership to balance the budget on the backs of the employees, including most of the lowest paid individuals on our campus,” and Anneta Argyres, president of the Professional Staff Union at UMass Boston, asked them to consider the effects of their choices.

“At a time when students need more support, more contact with faculty and staff and more access to campus jobs, your budget has resulted in larger class sizes, fewer graduate assistantships, fewer support for staff, and fewer jobs for our students,” she said. “We’re told you’ve made these budgetary decisions in order to protect UMass, but instead, these cuts are hurting the very institution that you, our trustees, have the responsibility to steward.”

Steve Striffler, president of the Faculty Staff Union at UMass Boston, urged trustees to pull from the system’s reserves to solve its budget woes.

“This is an ideal moment to do so not simply because we need it, but because the set of fiscal problems is temporary,” he said. “Enrollments are good, the state’s economy will bounce back. It’s a short-term problem that the reserves were designed for. Their use now can stop, or at least slow, the harm that has already been done, preserve the long-term integrity of our institutions and ensure we are ready when campus life returns, all without threatening the long-term fiscal health of the UMass system.”

Defending the spending cuts, board member Stephen Karam, who chairs the Administration and Finance Committee, called deficit spending “irresponsible,” said the system’s endowment is restricted by donors for long-term use, and asserted that raiding reserves would leave UMass “defenseless” ahead of an uncertain future.

“Not all of the reserves are available to be spent,” he said. “Available reserves, which we call our operating liquidity, will only cover less than three months of our operations.”

Calise said that depleting liquid reserves would leave the university unprepared for “future COVID or any other unforeseen events, not to mention the future, where we know FY ’22 is also going to be challenging.”