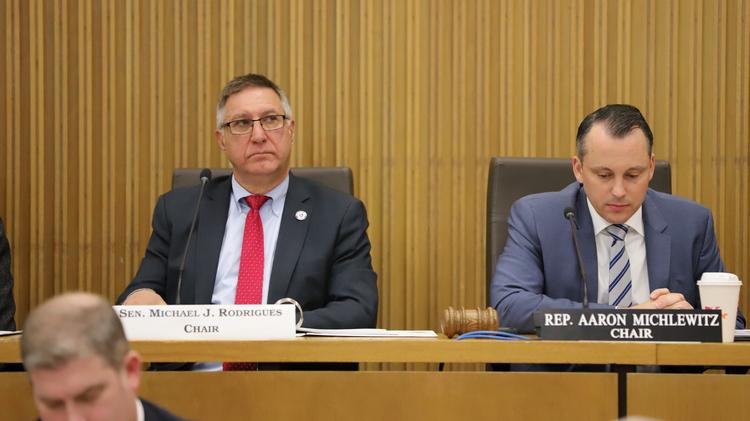 BOSTON – Despite signs that the state’s finances have not completely cratered during the pandemic, the Senate’s top budget official said this week he anticipates tax collections in fiscal 2021 to be down $5 billion from last year, and said lawmakers will need to dip “deeply” into the state’s $3.5 billion “rainy day” fund unless new federal aid arrives from Washington.

The state’s uncertain financial picture could start to come into clearer focus in the coming weeks with House and Senate leaders, as well as Gov. Charlie Baker’s administration, preparing to outline a plan to introduce and pass a long-term budget that would carry the state through July of next year.

Senate Ways and Means Committee Chairman Michael Rodrigues told business leaders this week that “some major announcements” would be made in the next couple weeks about how Beacon Hill leadership wants to proceed with a fiscal 2021 budget, as well as how to close the books on the fiscal year that ended June 30.

Rodrigues said he is currently working off estimates that tax collections will be down 15 percent to 18 percent from last year in fiscal 2021, compared to the 2.8 percent growth rate projected in January.

“It’s going to be a tough year, but we’ll get through this,” Rodrigues said.

The Westport Democrat made his comments Tuesday on a webinar hosted by Associated Industries of Massachusetts for its membership as part of a new “Commonwealth Conversations” series produced by the business trade group.

“Within the next couple of weeks we’re going to be making some major announcements relative to putting to bed, finally, the FY21 budget and to close out FY20,” Rodrigues told the business leaders, indicating the announcement would include a “more formal schedule” for budget deliberations.

State government has been operating since the fiscal year began in July on interim budgets, the most recent being a more than $16.5 billion spending authorization that expires on Oct. 31. The Legislature, however, extended formal legislative deliberations beyond July, knowing lawmakers would have to return to the State House this year to take up a spending bill for the remainder of the fiscal year.

Wherever budget writers land, the decision of how much tax revenue on which to base the annual budget will set off a flurry of lobbying by legislators and advocates to either find ways to bridge the revenue gap with higher taxes and fees, or to protect priorities from necessary spending cuts.

“We’ve been using a $6 billion revenue shortfall for just rounding, simple back of the envelope math, but as we dig deep into it it’s probably going to be closer to about a $5 billion revenue reduction,” Rodrigues said.

The other major wildcard in the state’s unprecedented budgeting process this year has been whether Congress would deliver additional federal relief to state and local governments. The House has passed a $3.4 trillion stimulus bill with more than $800 billion for state and local governments, but the relief package has stalled and bipartisan efforts at compromise have failed to lead to a breakthrough, although talks continue.

“The latest news out of D.C. is not optimistic,” Rodrigues said. “We’ve been pretty much told you can pretty much forget about having anything passed by Congress before the Nov. 3 election, which means we’re going to go into the FY21 budget probably counting on zero dollars of federal support, dipping deeply into the stabilization account, but doing so responsibly knowing that FY22 is going to be just as bad as FY21 and we can only spend that money in the savings account once.”

As Massachusetts businesses have slowly reopened as part of Gov. Baker’s phased approach to rebuilding the economy without jeopardizing public health, tax collections have defied the most pessimistic of projections from early in the pandemic when economist were warning of upwards of $8 billion in losses.

“We are anxiously waiting our September numbers. September is a big month in the tax world. It’s when all the estimated filings are done and it’s the end of the first quarter of the fiscal year,” Rodrigues said. “September numbers are going to be important and then we will get down to more public work.”

Senate President Karen Spilka said Wednesday that Rodrigues has been meeting weekly with House Ways and Means Chairman Aaron Michlewitz and Administration and Finance Secretary Michael Heffernan, and Rodrigues confirmed that the three talk “regularly” as they have monitored economic and tax activity.

Neither Michlewitz nor Heffernan could not be reached for comment on Thursday about Rodrigues’s remarks, and a Heffernan spokesman said work on budget planning is continuing.

Rep. Todd Smola, the ranking Republican on the House Ways and Means Committee, last week called it a “coin flip” whether Democratic leaders would push for a budget vote before the election, or try to pass another short-term spending bill.

Rodrigues, however, seemed inclined to want to try to pass an annual budget next month, and then turn his attention toward fiscal 2022, and planning for the next budget that Baker must file in January.

“Our goal is by the end of October to pass an FY21 budget and also we still have to close out FY20,” Rodrigues said.

Getting a budget proposed, amended and passed in each branch, and reconciled by the end of October will be a big lift, as the process for passing a budget usually takes several months.

Baker’s annual budget proposal filed in January before the pandemic took hold called for $44.6 billion in spending, with tax collections anticipated to grow by 2.8 percent to $31.15 billion.

Even if the revenue losses are smaller than once anticipated, Thomson said there’s no question that federal relief will be needed to spare businesses from higher operating costs as they struggle to get back on their feet.

Rodrigues, who described himself as the “UI nerd” of the Senate, also said the unemployment insurance liability for employers is his “biggest concern right now” for the employer sector, with costs expected to climb next year nearly 60 percent.

The chairman, however, did not indicate whether he would support a freeze in rates if Congress doesn’t allocate funding to help, instead pointing out that the Legislature passed a bill to protect employers hit hardest by job losses during the pandemic from being penalized when rates do increase.