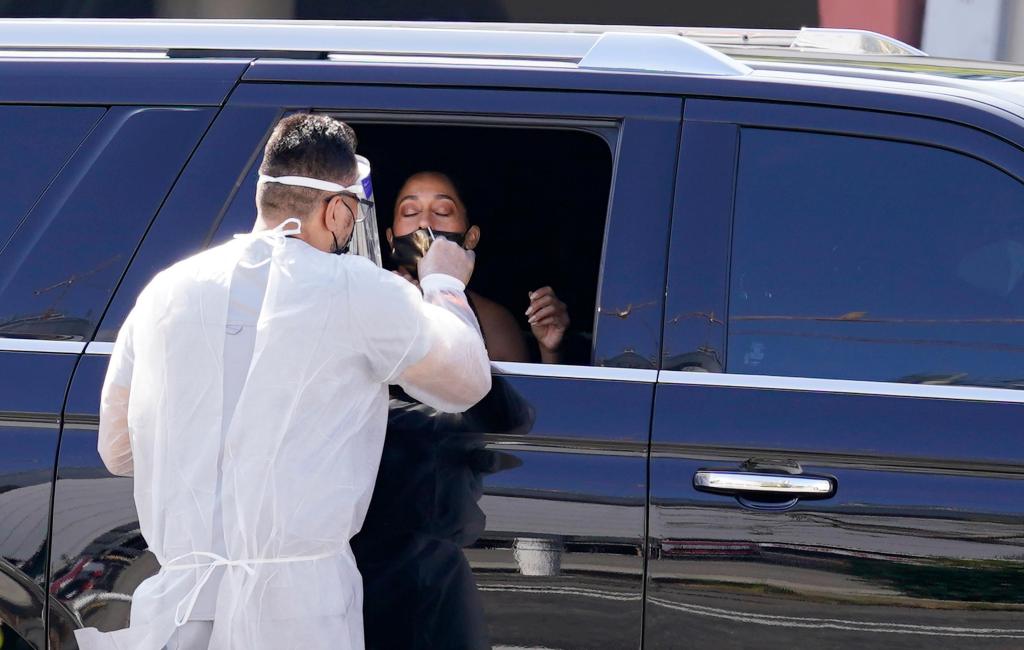 LOS ANGELES (AP) — The Latest from the Emmy Awards (all times PDT):

Zendaya is euphoric at the Emmys.

She won best actress in a drama for her role on HBO’s “Euphoria,” scoring one of the few long shot victories in a Sunday night full of wins from favorites.

Gleeful family and friends screamed, cheered, hugged and cried behind her as a stunned Zendaya accepted the trophy in what appeared to be a hotel suite.

“This is pretty crazy!” she said, trying to hold back tears.

On “Euphoria,” Zendaya plays Rue Bennett, a teenage addict struggling with her sobriety and recovery on the series that delves into sex, drugs, trauma and identity among high-schoolers.

The 24-year-old is the youngest to ever win in the category and she overcame a strong group of nominees that included Olivia Colman, Jodie Comer, Laura Linney and Sandra Oh.

There is no question of “Succession” at the Emmys: The son has trumped the father.

“Brian Cox,” I shared this with you,” Strong said as he accepted the trophy in a remote room.

On the show, Cox is a media magnate who successfully fights off the son, played by Strong, who is seeking to replace him.

Cox and Strong were considered favorites for the Emmy, but some thought they might split the vote and neither would win.

It’s the first Emmy and first nomination in a 12-year career for the 41-year-old Bostonian actor Strong.

“Don’t give up on love,” RuPaul said to the show’s fans, accepting the trophy from a dressing room in a remote location. “Believe in love and the power of love.”

Including the Creative Arts Emmy Awards given out earlier in the week, “Drag Race” won six Emmys and has won 19 overall in its 12 seasons.

With all eyes on “Watchmen,” its masked heroes and anti-heroes didn’t disappoint.

It was the biggest triumph of a big night for “Watchmen,” the year’s most nominated show.

The HBO series rebooted and reinvented the acclaimed 1980s graphic novel by Alan Moore about superheroes and vigilantes in an alternate-history dystopia.

“History is mystery,” Lindelof said as he accepted the best limited series Emmy in a remote room with many of his “Watchmen” colleagues behind them. “It is broken into a million puzzle pieces and many are missing, we know where those pieces are but we don’t seek them out because we know finding them will hurt.”

He dedicated the award to the Black victims of the 1921 Tulsa massacre, which has a central role on the show.

Mark Ruffalo won the Emmy Award for best actor in a limited series or TV movie for his dual portrayal of twin brothers, one of whom has schizophrenia, in HBO’s “I Know This Much Is True.”

It’s the first acting Emmy for the 52-year-old Ruffalo, who plays the Incredible Hulk in Marvel’s “Avengers” films.

He accepted the trophy as he sat on a couch in a remote room in upstate New York.

An emotional Ruffalo accepted the trophy as he sat on a couch in a remote room in upstate New York, calling for Americans to use their vote to “heal and honor and take care of each other and our most vulnerable people.”

Ruffalo also won a best TV movie Emmy in 2014 as an executive producer on HBO’s “The Normal Heart.”

Regina King is an Emmy superhero, and queen of the limited series.

King won best actress in a limited series or TV movie Sunday night for her role as Angela Abar, aka the masked hero Sister Night, on HBO’s “Watchmen.”

King was handed the trophy as she sat in a living room in the pandemic-altered Emmys.

It’s the fourth Emmy in six years for King, all of them for limited series.

She won the same award in 2018 for “Seven Seconds,” and took best supporting actress in a limited series or TV movie for two different roles on “American Crime” in 2015 and 2016.

She also won an Oscar and a Golden Globe in 2019 as best supporting actor in “If Beale Street Could Talk.”

Up with “Schitt’s Creek!”

The small show about a rich family left with nothing but a small town reached the Emmy big time on Sunday night, taking the coveted trophy for best comedy series.

The Canadian sitcom swept the comedy categories, winning seven Emmys for its sixth and final season.

They were the first seven Emmys handed out at Sunday’s unusual ceremony, and the gleeful, tearful cast was jubilant in their face masks and formalwear as they claimed Emmy after Emmy together at a Canadian pavilion.

“Our show is about the transformational effects of love and acceptance, and that is something that we need more of now than we have ever needed before,” Dan Levy said as he took the seventh trophy.

Dan and Eugene Levy created the show that aired in the U.S. on Pop TV.

Eugene Levy has ridden up “Schitt’s Creek” to his first acting Emmy.

Levy won the Emmy Award for best actor in a comedy series on Sunday night for Pop TV’s “Schitt’s Creek,” taking home the trophy for the sixth and final season of the show he co-created with his son, Dan Levy.

“It’s kind of ironical that the straightest role I’ve ever played lands me an Emmy for a comedy performance. So now I seriously have to question what I’ve been doing for the past 50 years,” said Levy.

With Levy’s win, “Schitt’s Creek” takes the first two Emmys of the evening.

He accepted the trophy in a remote, restaurant-like pavilion surrounded by his cast mates including his longtime collaborator Catherine O’Hara, who minutes earlier won best actress in a comedy series for playing his wife on the show.

E! host Giuliana Rancic had to miss the Emmy Awards virtual pre-show after she tested positive for the coronavirus.

Rancic announced in a video from home Sunday that she tested positive for the virus along with her husband and son. The show was hosted by Brad Goreski and Nina Parker.

“Now as much as I didn’t want to hear that, I’m very thankful I heard it before I traveled and possibly could have exposed other people,” Rancic, the longtime E! host. “So for that, I’m thankful.”

Rancic said she and her family are holding up well health wise.

“My husband Bill and our son also did test positive, but we’re all doing well and taking care of each other so I’m going to get back to doing that,” she said.

“But I just want to say I’m wishing you all the best and please protect yourselves and protect those around you. Take good care and I’ll see you on the next red carpet.”

After 45 years of nothing-but-funny and a six-year run down “Schitt’s Creek,” Catherine O’Hara has an acting Emmy.

O’Hara won the Emmy Award for best actress in a TV comedy for her role as Rose family matriarch Moira on “Schitt’s Creek” on Sunday night.

Jennifer Aniston presented the award, the first handed out at Sunday night’s ceremony, from Staples Center, and O’Hara accepted in a remote restaurant-like pavilion with the “Schitt’s Creek” cast in face masks and formalwear around her.

A man in a black tie hazard suit handed her the trophy.

“May you have as much joy being holed up in a room or two with your dear family as I have with my dear Roses here,” an emotional O’Hara said.

The win puts O’Hara in the elite company that her peers and co-stars have already held her in for decades.

Past winners of the award include Lucille Ball, Mary Tyler Moore, Candice Bergen and Julia Louis-Dreyfus.

O’Hara had one previous Emmy for writing on “SCTV” in 1982 in the earlier days of years of collaboration with her “Schitt’s Creek” co-star Eugene Levy.

It looked like any awards show as Emmys host Jimmy Kimmel took the stage at the Staples Center in a tuxedo and started cracking jokes to laughter from famous audience members.

But it was anything but typical. While Kimmel was real as he opened the 72nd Emmy Awards on Sunday night, the audience was clearly phony, inserted from past footage.

“Welcome to the pandemmies!” Kimmel said to open his monologue. “You can’t have a virus without a host.”

Kimmel played it straight until halfway through the opening bit, when he admitted he was nearly alone and the telecast showed the sea of empty seats.

Nominees were represented by cardboard cutouts, and by Jason Bateman of “Ozark” pretending to be one.

Kimmel then walked into a room where he was surrounded by dozens of nominees shown on video feeds from their homes, hotel rooms and other remote locations. “I feel like I’m in a Best Buy,” he joked.

It’s eerily empty both outside and inside the Staples Center in Los Angeles during the run-up to an Emmy Awards unlike any other.

At a moment when the red carpet would normally be thronged with black-tie stars, media and fans, spaced-out security and staff and a handful of show contributors were among the only people outside on Sunday afternoon.

Tracee Ellis Ross, nominated for best actress in a comedy series for “black-ish,” leaned out of an arriving SUV to take a coronavirus test before entering to take part in the show.

Many other nominees are expected to take part from their homes, hotels and other remote locations.

Little else has been revealed about the 72nd Emmy Awards, hosted by Jimmy Kimmel. The show starts at 5 p.m. Pacific/8 Eastern on ABC.