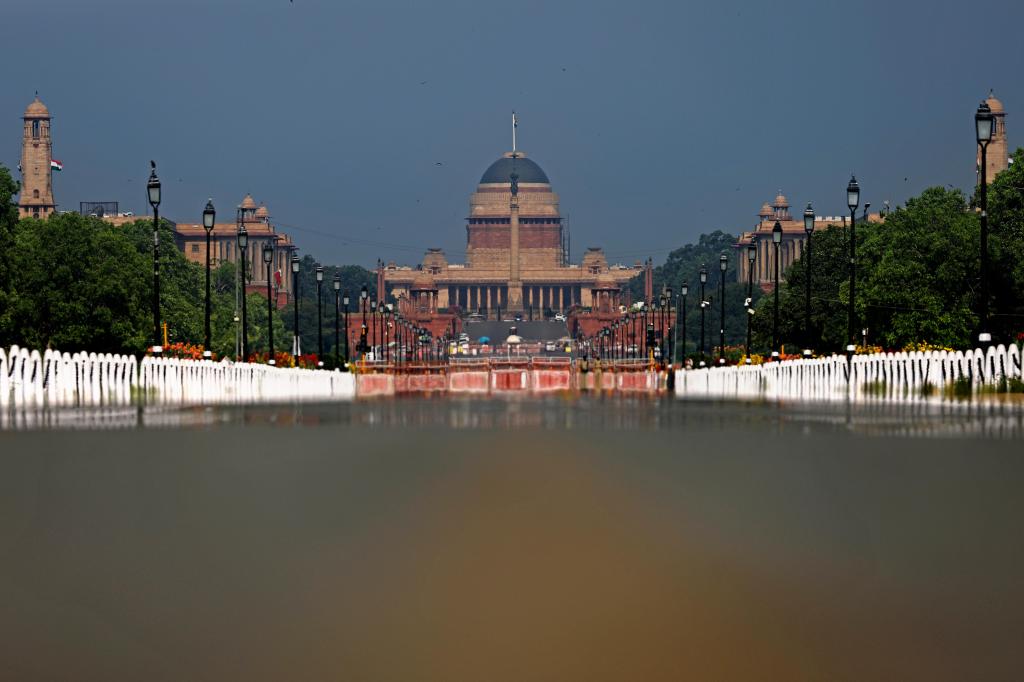 — WHO chief responds to Trump, says virus did not originate in lab.

— Workers rally on May Day in Portugal with social-distancing measures.

GENEVA — The head of emergencies at the World Health Organization reiterated that the group believes the novel coronavirus is “natural in origin.”

Dr. Michael Ryan responded Friday to to comments by U.S. President Donald Trump, who said he has seen information that the virus may have emerged from a virology institute in China.

Ryan said WHO teams have listened “again and again” to many scientists who have looked at the gene sequences and the virus, “and we are assured that this virus is natural in origin.”

Ryan said it was important to establish the natural host of the virus, which could help pave the way for a better understanding of it and ways to prevent and respond to future outbreaks.

On Thursday, Trump suggested he was confident that China’s Wuhan Institute of Virology was at the origin of the coronavirus, before again criticizing WHO’s early response to the outbreak. Most scientists believe the virus emerged at a market in the Chinese city, linked to an animal that has not yet been identified.

The WHO’s Emergency Committee on the COVID-19 outbreak recommended Friday that the outbreak remains an international public health emergency, its highest level of alert.

Portugal’s main union organized the event with special measures in place. Protesters respected indications to remain separated by several meters as they gathered on a large grass-covered promenade where the traditional May Day marches finish. Wearing face masks, around 500 protesters carried signs with messages against layoffs and precarious labor contracts.

“It’s important to be here on May Day in the name of all the workers that cannot be here and that are allowing for the country to keep going in such a critical time,” railway worker Catarina Cardoso said.

Portugal attributes 1,007 deaths to the outbreak from more than 25,000 confirmed cases.

In neighboring Spain, the two main labor unions canceled all marches and instead held online events.

The openings come with social distancing and mask-wearing guidelines as well as limits on the number of customers allowed inside any establishment. Business owners are required to collect contact information for their customers in case contact tracing is needed.

KUALA LUMPUR, Malaysia — Rights groups have criticized Malaysia over a May Day crackdown that saw hundreds of immigrants without valid documents being detained in viral hotspot areas in Kuala Lumpur.

Friday’s raids in several buildings under strict lockdown came two days after a minister said immigrants without valid documents found in these areas would be sent to detention camps.

Tenaganita, a local migrants rights group, slammed the government for breaking its promise not to take action against migrants who come out for virus screening. It said Rohingya refugees and minors as young as a year old were among those rounded up.

Human Rights Watch said more than 700 people were arrested and called for their immediate release. Amnesty International Malaysia said the mass detention in a middle of a pandemic was an appalling violation of human rights, with detainees reportedly being cramped into small vans and not given masks.

The raids came just after the government announced that most businesses will be allowed to reopen from Monday, ahead of the end of a partial lockdown on May 12.

Thirty-one provinces are on the first day of a three-day lockdown. The weekend curfews are expected to continue through the month of Ramadan.

DENVER — Getting a haircut and shopping in person at retail stores were allowed again in much of Colorado starting Friday as the state continues to ease restrictions set up to stop the rapid spread of the coronavirus.

Stay-at-home orders remained in place in Denver and some surrounding counties, with only essential businesses like grocery, liquor and hardware stores open there.

Goodwill reopened 16 stores around Colorado with changes to protect people’s safety. Dressing rooms are closed and one-way aisles were set up to make it easier for customers to stay 6 feet apart.

Elective surgeries and curbside pickup at retail shops were allowed to begin outside the Denver area on Monday in the first wave of the relaxation of restrictions under Democratic Gov. Jared Polis’ “safer at home” order.

Offices can reopen starting Monday but only with half the usual staff to allow for social distancing.

SARAJEVO, Bosnia-Herzegovina — A Russian military team of anti-coronavirus experts has been prevented from entering Bosnia from Serbia.

The 24-member team traveling in five vehicles was stopped at Bosnia’s border with Serbia on Friday after failing to get a permit from the authorities in Sarajevo. The soldiers had planned to disinfect a hospital in the south of the Balkan country.

Radio Sarajevo says the Russian soldiers were stopped at the border because “foreign troops cannot enter Bosnia without a permit.”

The Russian team has been deployed in Serbia for over a month, receiving praise from its pro-Moscow officials.

After a US-mediated peace agreement in 1995 that stopped a bloody civil war, Bosnia was declared a single state consisting of two entities, the Croat-Muslim federation and the Serb-run semi-autonomous entity.

A separate Russian disinfection team was directly flown from Moscow to the Serb-run parts of Bosnia last month.

ROME — The number of patients in Italy’s intensive care beds is continuing to decline.

That’s allowing hospitals to better deal with the COVID-19 outbreak, which when it began weeks ago had overwhelmed the national health care system, especially in heavily stricken northern regions.

According to health ministry ministry figures released on Friday, 116 intensive care unit beds were freed up in the previous 24 hours.

For back-to-back days, the daily nationwide tally of new cases was lower than 2,000 – 1,965 coronavirus infections were registered in a 24-hour period, raising to 207,428 cases the nation’s known total in the pandemic. Doctors have cautioned that many cases have likely gone undetected as some people with the virus show no or nearly no symptoms.

Italy registered 269 more deaths of persons infected with COVID-19. Its death toll now stands at 28,236. Italy’s worst-hit region, Lombardy, still is registering several hundred new cases daily, while many regions, including that of Lazio, which includes Rome, are registering cases far fewer than 100 each day.

LONDON — The British government says it has met its target of conducting 100,000 coronavirus tests a day by the end of April, after more than doubling the number carried out in just two days.

Health Secretary Matt Hancock says 122,347 tests were carried out Thursday, the last day of the month. That’s up from 81,611 announced the day before and just over 52,000 the day before that.

The figure represents a tenfold increase since the start of April, when Hancock set the target.

The U.K. has promised to vastly expand testing as part of a “test, track and trace” strategy to control the spread of the virus and allow the country to emerge from lockdown. Public health officials have set up almost 100 mobile testing units and dozens of drive-through sites, and tests are being offered to millions of health care workers, essential staff and older people.

It’s unclear whether all the tests counted in Friday’s total have been completed, however. The Health Service Journal reported that the total includes home-testing kits that people have ordered through a government website, but which have not yet been returned and processed.

As of Friday, Britain has recorded 27,510 deaths among people with COVID-19 in hospitals, nursing homes and other settings, the third-highest total of any country in the world.

ALBANY, N.Y. — New York schools and colleges will remain shut through the end of the academic year.

The order announced Friday by Gov. Andrew Cuomo applies to 4.2 million students statewide and continues an order that had been set to expire May 15.

The Democratic governor said it is too risky to reopen when the virus is still sending nearly 1,000 people to the hospital every day in the state hardest hit by the coronavirus pandemic.

At the time, Cuomo dismissed De Blasio’s announcement as an “opinion,” saying the governor had the power to make decisions on a statewide basis.

LONDON — British doctors have published a working definition of a rare inflammatory syndrome affecting children that may be linked to COVID-19, which they hope will help other physicians identify cases.

In a statement on Friday, the Royal College of Pediatrics and Child Health said it was releasing a detailed definition of the syndrome, including the symptoms seen in children, diagnostic tests that should be used and potential treatments.

The group stressed that “it remains unclear whether COVID-pediatric multi-system inflammatory syndrome is caused by COVID-19” and emphasized that to date, only about 20 children in Britain and a small number across Europe have been identified.

Children remain among the least affected group by COVID-19 and typically suffer only mild symptoms when infected.

Earlier this week, Britain’s Pediatric Intensive Care Society said there was “growing concern” that either a COVID-19 related syndrome was emerging in children or that a different, unidentified disease might be responsible.

Similar warnings were issued by pediatric groups in Spain and Italy and cases have been noted in Belgium, France and the U.S.

PORTLAND, Maine — The first phase of the reopening of Maine’s economy began Friday on an acrimonious note after a restaurant owner aired his grievances during an appearance on Fox News Channel.

Savage also shared what he said was Mills’ private cellphone number. A call to the number said it was “unavailable at this time.”

“She’s doing this all rogue on her own. We’ve had enough of it. We’re encouraging all businesses in Maine to open up. We never should’ve been closed in the first place,” Savage said on primetime host Tucker Carlson’s show Thursday.

Mills had no immediate comment. The state remains under a stay-at-home order until May 31, but residents on Friday became entitled to restricted use of golf courses; visits to dentists, barbers and hairdressers; and drive-in religious services. Restaurants won’t be allowed to open for dining in until June 1.

WASHINGTON — Washington, D.C. health officials announced Friday morning that 335 positive new COVID-19 infections had been identified. That brings the city’s total up to 4,658 with seven new deaths for a total of 231.

Mayor Muriel Bowser declared a state of emergency on March 11 and issued a stay-home order on March 30 for Washington’s approximately 700,000 residents. Bowser, a Democrat, has also announced plans to turn Washington’s convention center into a 1,500-bed field hospital.

ATHENS, Greece — Greece’s health ministry announced there were no coronavirus-related deaths recorded in the last 24 hours and 21 new confirmed infections.

The total infections in Greece stand at 2,612, although authorities say the true number is likely much higher. The country’s death toll stands at 140.

Greece imposed lockdown measures early in the outbreak, a move that has been credited with keeping the number of deaths and seriously ill low. The restrictions on movement and businesses will be eased gradually, starting Monday.