The Latest: Vatican relying on reserves due to lost income 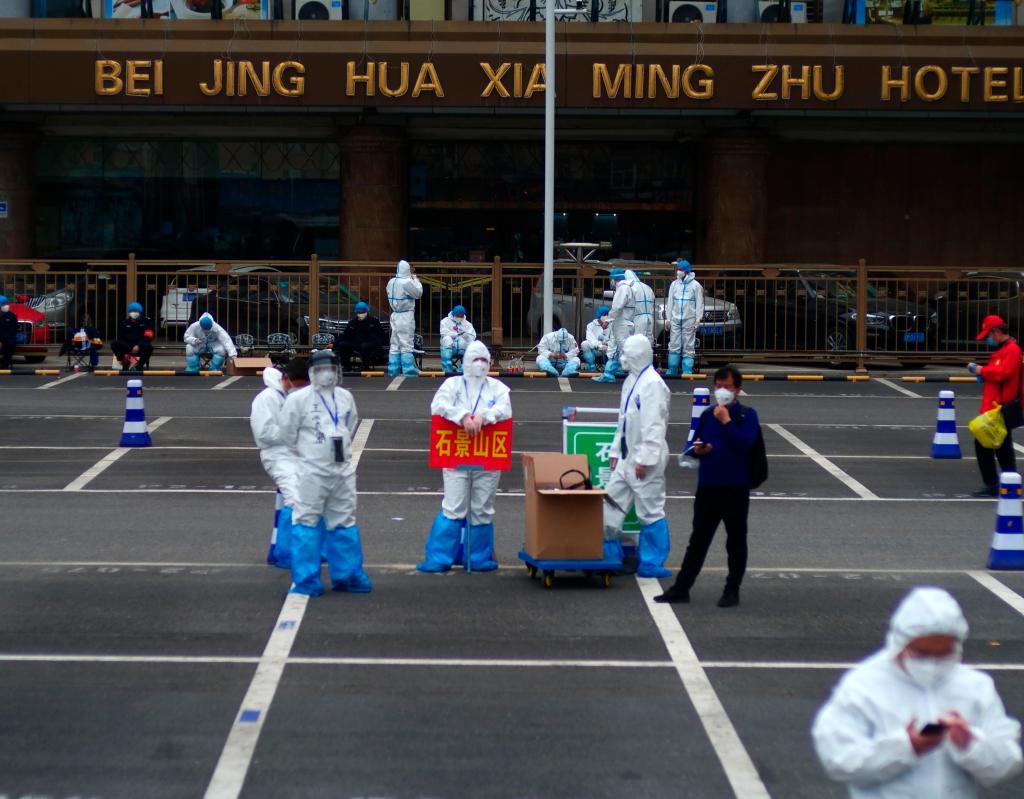 VATICAN CITY — A Vatican official says the Holy See is relying on emergency financial reserves to weather the loss of its main source of income during the coronavirus pandemic which are ticket sales from the shuttered Vatican Museums.

The Rev. Augusto Zampini, a key member of Pope Francis’ coronavirus task force, says Vatican City is no different than any company and is losing income as a result of the lockdown. He says some high-ranking Vatican officials have offered to take salary cuts, while the Vatican has put a halt on signing any new contracts.

The Vatican followed Italy’s lead and shuttered the famous museum, which funds the Holy See bureaucracy, on March 8.

Zampini says donors have come forward to sustain the COVID-19 task force, a multi-faceted group working with the Vatican’s Caritas charity office and local churches to respond to virus-related needs around the world.

Pope Francis celebrated his feast day Thursday by donating five ventilators to a hospital in Romania.

MEXICO CITY — Mexican President Andrés Manuel López Obrador says he will try to schedule another conversation with U.S. President Donald Trump, because their two countries should coordinate the restarting of their economies.

López Obrador says both countries hope “to little by little return to the normal production at the border” and he predicts, “The time is going to come when we will reach an agreement.”

The supply chain for many industries, especially automotive, wind throughout North America. Social distancing measures have idled plants in Mexico and the U.S. disrupting manufacturing.

Landau is concerned about virus lockdowns damaging the flow of parts and goods that feed businesses in the three nations of the North American free trade zone — United States, Mexico and Canada — and warned that “if we do not coordinate our response, these chains can evaporate.”

PRAGUE — The Czech government is speeding up its plan to relax the restrictive measures it adopted to contain the coronavirus pandemic.

Industry and Trade Minister Karel Havlicek says stores with space up to 2,500 square meters (26,910 square feet) could reopen as soon as Monday, along with fitness centers and driving schools. That’s two weeks sooner than originally planned.

That will be followed by shopping malls and hair salons on May 11 before restaurants and hotels can return to business two weeks later.

Havlicek says the move was made possible by the positive developments regarding the outbreak in the Czech Republic.

Health Ministry figures show over 7,100 tested positive for the virus and 210 have died.

NEW YORK — Further evidence is emerging that far more New Yorkers have had the coronavirus than the number confirmed by lab tests.

Gov. Andrew Cuomo says a state survey of around 3,000 people found that 13.9% had antibodies suggesting they had been exposed to the virus.

In hard-hit New York City, 21% of the people tested had antibodies.

Cuomo cautions the data is preliminary. The sample of people tested was small and people were recruited for the study at shopping centers and grocery stores, which meant they were healthy enough to be out in public.

Experts also say having antibodies is not necessarily proof someone is immune from the virus.

But Cuomo says knowing how many people have antibodies could potentially help set policy on when to reopen parts of the state.

DETROIT — A Canadian nurse allowed to cross the border to work in Michigan was busted with 153 pounds (69 kilograms) of marijuana in the trunk of her car.

Authorities say Terri Maxwell, a 48-year-old nurse from Amherstburg, Ontario, was arrested Wednesday at the Ambassador Bridge in Detroit. The U.S.-Canada border is restricted to health care workers, commercial trucks and travelers deemed essential during the coronavirus pandemic.

MILAN — The number of people testing positive for coronavirus in Italy grew by 2,646 in the last 24 hours, including 40% of those in the hard-hit Lombardy region where the first domestically transmitted case was confirmed just over two months ago.

That brings to 189,973 the total number of positives as of Thursday. Testing has been expanded but it still doesn’t reach every suspected case, including many at home who believe they may be infected but aren’t able to get tested. The number of positives in Italy grew by a rate of 1.4%, indicating a national slowing of infection, as the country prepares to ease a nationwide lockdown. Premier Giuseppe Conte is expected to announce details in the coming days.

LONDON — Britain’s health secretary has announced that as part of a drive to test, track and trace the spread of the coronavirus, all essential workers who need one can now book a swab test for themselves and their family members.

The procedure will help workers in nursing homes, schools and many other key industries decide whether they can return to work safely. Thirty-one drive-through test centers are now operating across the U.K., and more mobile test centers are planned.

Health Secretary Matt Hancock says the government is testing a contact tracing app, as well as preparing to hire 18,000 people to work on contact tracing.

John Newton, coordinator of the country’s coronavirus testing program, says Britain is on track to reach the government’s target of 100,000 tests per day by the end of April.

JAKARTA, Indonesia — The Indonesian government has totally suspended all domestic and international passenger flights until June 1, following restriction for people in the world’s most populous Muslim nation from traveling back home to celebrate the Islamic holiday during the coronavirus pandemic.

The transportation ministry’s director general of aviation, Novie Riyanto, says the ban applies to both commercial and charter travel.

Riyanto says there are exceptions for the leadership of state institutions, state representatives for international organizations as well as for the repatriation of Indonesian citizens, foreigners and those related to law enforcement and emergency services from flight officials after having the ministry’s permission.

President Joko Widodo previously banned people from traveling back home to celebrate Eid al-Fitr to mark the end of the dawn-to-sunset fasting during Ramadan. Health experts have warned of a chance Indonesia will face an outbreak of coronavirus cases that could infect 1 million people following Ramadan, unless the government takes stricter measures.

WASHINGTON — The U.S. Navy says that after weeks of work, all of the roughly 4,800 sailors on the coronavirus-stricken USS Theodore Roosevelt aircraft carrier have been tested for the virus. The ship has been sidelined in Guam since March 27, moving sailors ashore, testing them and isolating them for nearly a month.

The number of hospitalized sailors continues to decline. As of Thursday, 840 crew members have tested positive for the virus, four are in the hospital, and 88 have recovered. None are in intensive care and more than 4,200 have been moved ashore.

YEREVAN, Armenia — Armenia is sharply curtailing this year’s commemoration of the massacre of 1.5 million Armenians by Ottoman Turks because of concerns about the spread of coronavirus.

The observances of the killings that began in 1915 are important civic events in Armenia, bringing large numbers of people to a torchlight procession and visiting the sprawling Tsitsernakaberd memorial complex in Yerevan.

Prime Minister Nikol Pashinian says there will be no procession on Thursday night, but urged the capital’s residents to shine flashlights from their windows. The public will not be allowed on Tsitsernakabersd on Friday, the commemoration day. Armenians and many historians consider the killings to be genocide, but Turkey, successor of the Ottoman Empire, vehemently denies the claim.

BANGKOK — U.S. Secretary of State Mike Pompeo has accused China of taking advantage of the global preoccupation with the coronavirus crisis to push forward with its territorial ambitions in the South China Sea.

Pompeo made the accusation Thursday at a virtual meeting to discuss COVID-19 with the foreign ministers of the 10-member Association of Southeast Asian Nations.

Beijing’s expansive territorial and fishing claims in the South China Sea conflict with those of ASEAN’s maritime members and are sharply contested by Washington. Most other meeting participants’ statements focused on the health, economic and social problems wrought by COVID-19.

LONDON — The British government says another 616 more people with the coronavirus have died in U.K. hospitals, taking the total to nearly 19,000.

The daily increase reported was lower than the 759 in the previous 24-hour period.

The U.K.’s death toll is the fourth highest in Europe, behind Italy, Spain and France, all of whom have reported more than 20,000 deaths.

There has been increasing scrutiny of the U.K. figures in recent days for understating the actual number of people having died of COVID-19. They don’t include those who have died in care homes or elsewhere in the community.

The government also said the number of daily tests increased slightly to more than 23,000. The number remains well shy of the government’s target of 100,000 a day by the end of the month, an ambition that has met with widespread skepticism.

ZAGREB, Croatia — Croatia’s prime minister has announced a phased easing of lockdown measures against the new coronavirus. He says the situation in the European Union country appears under control but caution remains necessary.

Andrej Plenkovic said Thursday that small trading businesses will reopen first next week along with bookstores, museums and art galleries. Individual sports training and some public transit will resume, he said.

The second phase in two weeks will include full restoration of the public health system and private clinics, as well as such services as beauty parlors. Plenkovic insisted that social distancing and hygienic measures will stay in place.

The third phase, on May 11, will pave the way for the reopening of shopping malls, pre-schools and primary education, as well as some universities. Smaller groups of up to 10 people will be allowed to gather. Parks may open as well as restaurants and cafes, but only outdoors.

“This is not the return to life before the epidemics,” Plenkovic said.

KUALA LUMPUR, Malaysia — Malaysia will extend its partial lockdown by another two weeks until May 12.

Although daily infections have dropped to double-digit in the past week, Prime Minister Muhyiddin Yassin says “we have not won the battle against the COVID-19 outbreak.”

Muhyiddin said the six-week closure of nonessential services and schools, that is due to end April 28 will continue until the government is confident of fully containing the virus.

In a in a televised speech Thursday he said if the number of cases continue to drop drastically, the government may lift the restrictions in phases. Malaysia has reported more than 5,600 infections.

SINGAPORE — Singapore has recorded more than 1,000 new cases Thursday to bring its total past 11,000. It has now overtaken South Korea to be the fourth worst-hit nation in Asia after China, India and Japan.

Fatality is low at 12. The numbers have consistently breached 1,000 daily since Monday because of aggressive testing of foreign workers locked down in crowded dormitories across the city-state.

The upsurge has forced Singapore to extend its partial lockdown by another four weeks until June 1.