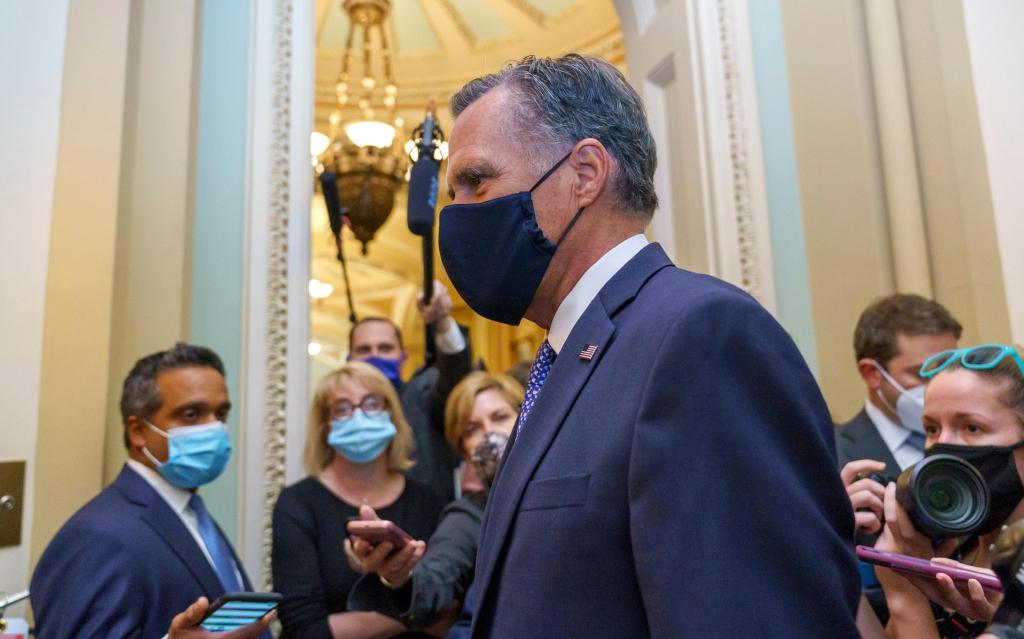 WASHINGTON (AP) — The Latest on the Supreme Court vacancy created by the death of Justice Ruth Ginsburg (all times local):

Utah Sen. Mitt Romney says he will not oppose a Senate vote on President Donald Trump’s nominee to the Supreme Court.

In a statement Tuesday, Romney said he intends to follow the Constitution and precedent in considering Trump’s nominee. If the nominee reaches the Senate floor, “I intend to vote based upon their qualifications,″ Romney said.

Romney’s views had been closely watched after two other Republican senators — Lisa Murkowski of Alaska and Susan Collins of Maine — urged that a vote be delayed until after the Nov. 3 presidential election.

Romney said his decision was “not the result of a subjective test of ‘fairness’ which, like beauty, is in the eye of the beholder. It is based on the immutable fairness of following the law, which in this case is the Constitution and precedent.″

Trump says he’ll announce his nominee on Saturday at the White House.

The ex-judges, appointed by both Democratic and Republican presidents, say the judicial confirmation process has become “dangerously politicized.’ They warn that injecting a bitter Supreme Court confirmation fight “into this noxious mix” could “unalterably change and diminish the public’s faith in this vital institution.’

The legitimacy of the Supreme Court “is not something that can be recovered if it is lost,’ the judges wrote in a letter to Senate leaders from both parties. “It is up to you to demonstrate the same restraint demanded of our judiciary.’

In addition to Webster, who was a district and appeals court judge before heading the FBI and CIA, the letter is signed by nine other former judges. They include appeals courts judges H. Lee Sarokin of New Jersey, Thomas Vanaskie of Pennsylvania, and Ann Claire Williams of Illinois.

Republican Sen. Martha McSally, who is running in a special election in Arizona, says re-electing her is key not only to keeping the GOP in control of the Senate but also to ensuring that President Donald Trump’s Supreme Court nominee is confirmed.

If her Democratic opponent, Mark Kelly, wins, he could take office as early as Nov. 30. This would shrink the GOP’s Senate majority as it works to confirm Trump’s nominee. Kelly has maintained a consistent polling lead over McSally, who was appointed to the seat held by John McCain when he died in 2018.

McSally said Tuesday on “Fox & Friends” that, “We’re at ground zero here in Arizona. She said Kelly “came out and said he would be with (Senate Minority Leader Chuck) Schumer to delay and get some liberal activist judge on the bench. So the stakes have just gone up in our race, in particular. We’re a dead heat right now.”

McSally is among Republicans who believe the current Senate should vote on Trump’s nominee without delay. Currently, Republicans hold 53 seats in the 100-member chamber.

Graham, R-S.C., said late Monday on Fox News that he wouldn’t be intimidated by Democrats, who vehemently oppose any confirmation vote until a new president is inaugurated. In 2016, Senate Majority Leader Mitch McConnell refused to allow a vote on President Barack Obama’s nominee, Judge Merrick Garland during an election year.

“They tried to destroy Brett Kavanagh so they could fill the seat,” Graham told Fox News, adding: “It didn’t work with Kavanaugh. We’ve got the votes to confirm Justice Ginsburg’s replacement before the election. We’re going to move forward in the committee. We’re going to report the nomination out of the committee to the floor of the United States Senate so we can vote before the election.”

Graham, who subsequently took over the Judiciary chairmanship from Sen. Charles Grassley, said, “After Kavanaugh everything changed with me. They’re not going to intimidate me, Mitch McConnell or anybody else.”

“We’re going to have a process that you’ll be proud of,” Graham said. “The nominee is going to be supported by every Republican in the Judiciary Committee. We’ve got the votes to confirm the justice on the floor of the Senate before the election and that’s what’s coming.”

Republicans outnumber Democrats in the Senate, 53-47 and can confirm a justice by a simple majority.