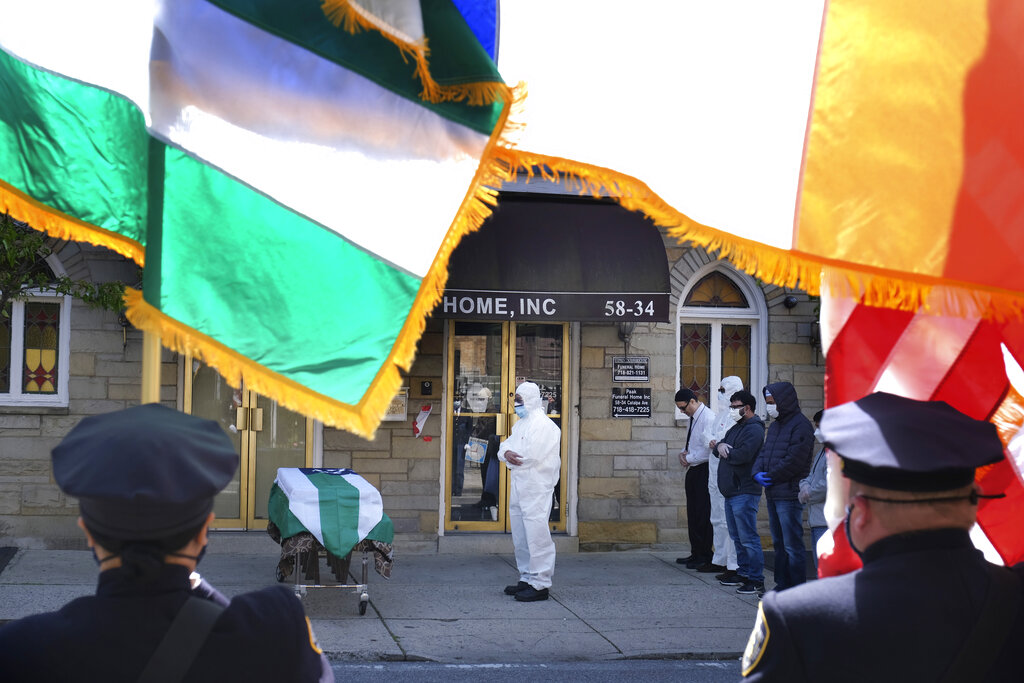 HARRISBURG, Pa. — Residents of north central and northwestern Pennsylvania are projected to be the first in the state to be released from Gov. Tom Wolf’s stay-at-home order, and many retail stores in those areas should be able to reopen under a statewide plan to be released Wednesday night.

Wolf wants to begin easing some pandemic restrictions on May 8 in areas of Pennsylvania that have been lightly impacted by the new coronavirus.

The virus has infected more than 35,000 people in Pennsylvania and killed more than 1,600, but Wolf, a Democrat, says the state has made sufficient progress in its fight against COVID-19 to begin a gradual loosening of restrictions. Republicans are pressing for a more aggressive timetable.

UNITED NATIONS — U.N. Secretary-General Antonio Guterres has called on people on the 50th anniversary of Earth Day to “act decisively to protect our planet from both the coronavirus and the existential threat of climate disruption.”

The U.N. chief is urging a shift from “the gray to green economy,” an end to fossil fuel subsidies, and for polluters to start paying for their pollution.

Guterres says: “On this International Mother Earth Day, all eyes are on the COVID-19 pandemic – the biggest test the world has faced since the Second World War.”

The secretary-general says nations and people must work together to save lives and ease suffering “but there is another deep emergency — the planet’s unfolding environmental crisis.”

He says “biodiversity is in steep decline” and “climate disruption is approaching a point of no return.”

Trump says at a White House briefing that he disagrees “strongly” with the Republican governor’s decision to allow the reopening of businesses like barber shops where social distancing is impossible, saying they stand “in violation of the phase one guidelines” his administration released last week.

SAO PAULO — Brazil’s new health minister is expressing doubts about projections that have guided governors’ decisions on how to handle the coronavirus outbreak.

Nelson Teich says it is impossible that estimates for total death counts vary so much, adding there needs to be a standard model of analysis.

Teich took office on Friday after President Jair Bolsonaro fired his prior minister, whose repeated support for governors’ stay-at-home measures ran counter to Bolsonaro’s position that the Brazilian economy needs to keep moving. Teich, who made his career on the business side of health care, says Brazil is already looking at ways to ease social isolation despite the fact the crisis’ peak is yet to come.

MINNEAPOLIS — Minnesota has struck a deal with the University of Minnesota and the Mayo Clinic to test as many as 20,000 people per day for the coronavirus.

Gov. Tim Walz calls the partnership a breakthrough for rapid and widespread testing for COVID-19, which is seen as a key across the country for reopening businesses amid the pandemic. He says everyone with symptoms of the coronavirus can get tested once the plan ramps up.

Walz adds the plan should allow Minnesota to test at a higher rate than any other state, and potentially any other country. The state will tap $36 million to cover the costs from a fund the Legislature has already approved.

Neither the governor nor other officials who briefed reporters would give a firm timetable for reaching 20,000 tests per day except to say that they were aiming to do it in the next few weeks.

He noted medical experts’ guidance saying proper masks keep patients infected with coronavirus from spreading it to others.

“Think of wearing a mask in public as just being polite to others,” Edwards said at his daily news conference, calling mask-wearing part of “new normal” of life when restrictions are lifted.

It remained unclear exactly how and when restrictions will be lifted but Edwards said he expects to deliver more information as early as Monday.

The company’s Threat Analysis Group says in a blog post that some have tried to trick people into downloading malware by impersonating international health organizations. It said one South American group, known as Packrat, spoofed the World Health Organization’s login page.

Google says people who work at public health agencies are becoming targets due to the new coronavirus and it’s proactively adding extra security for such people — more than 50,000 high-risk accounts in all.

While Google said it has not seen an overall increase in phishing attacks by government-backed groups, the use of COVID-19 themes represents a change in tactics.

BOSTON — The Massachusetts death toll in the coronavirus pandemic has surged past 2,000, about doubling in seven days as the state becomes a hot spot.

There were 221 new deaths, pushing the overall toll to 2,182, officials said. It was the most virus deaths reported in a single day in Massachusetts, and the first time the state has recorded more than 200 in a day.

There were more than 1,700 new cases reported, bringing the number of confirmed cases close to 43,000. More than half the deaths — 1,205 — were reported in long-term care centers, such as nursing homes. The average age of people who have died of confirmed COVID-19 is 82, officials said.

Vice President Mike Pence recently said the White House is closely watching the Boston area, and the coordinator of the federal coronavirus task force said officials are “very much focused” on Massachusetts.

Gov. Gavin Newsom calls it the first significant change to the state’s stay-at-home order that has been in place for more than a month due to the coronavirus outbreak.

The change covers surgeries that are not emergencies. Newsom says examples include procedures for tumors, heart valves and chronic disease. The change does not include purely cosmetic surgeries.

Newsom says state officials will be monitoring hospitals closely to make sure they are not overwhelmed. If there is a surge of coronavirus cases, the scheduled surgery ban could be put back in place.

TBILISI, Georgia — Several hundred farmers blocked a main road in the country of Georgia in a protest against strict measures taken to try to stifle the spread of coronavirus.

The protest in Marneuli took place on the same day that the Georgian parliament voted to extend a state of emergency through May 22.The farmers in the town about 30 kilometers (20 miles) south of the capital Tbilisi complained that markets and stores are short on food and supplies and that they cannot sell their agricultural products.

Georgia has reported 416 cases of coronavirus infection and five deaths.

BRUSSELS — The European Union is aiming to set up a humanitarian air bridge to help move aid, equipment and facilities to parts of Africa hit hardest by the coronavirus.

EU foreign policy chief Josep Borrell says “France has been proposing to be the first country that can participate.”

Borrell says the bloc’s executive arm, the European Commission, has “means and tools” and will study ways to take the project forward. He provided no details about how it would work or when it might be operational.

SACRAMENTO, Calif. — The California Highway Patrol says it is temporarily banning rallies at the state Capitol and other state facilities because of the pandemic.

The change in policy came after hundreds of protesters gathered on the Capitol grounds in Sacramento on Monday, many without wearing masks or following recommendations to remain more than six feet apart to slow the spread of the coronavirus.

The same group had planned additional rallies in coming days against Gov. Gavin Newsom’s orders that people remain at home except for essential activities. Additional similar rallies have been happening across California and the nation, with more planned.

ANKARA, Turkey — Turkey’s health minister has reported 117 additional COVID-19 fatalities in the past 24 hours, bringing the total death toll to 2,376.

Fahrettin Koca also reported 3,083 new confirmed infections in the country, raising the total to 98,674. The number of new cases was the lowest since April 4 and down from the 4,611 cases reported the previous day.

President Recep Tayyip Erdogan said this week that the number of daily infections is stabilizing and that the country could transition to normal life after a religious holiday at the end of May.

“The data indicates that the outbreak is under control,” Koca told reporters.

But he warned against any relaxation of measures to contain the spread, especially during the upcoming holy Muslim of month of Ramadan, when people traditionally hold fast-breaking dinners with family and friends.

MADRID — Spain’s parliament has approved the government’s proposal to extend the country’s state of emergency for a further two weeks, through May 9.

The state of emergency was declared on March 14, granting the government extraordinary powers to maintain a lockdown to help control the coronavirus outbreak.

Spain will further relax its confinement rules next Monday when it lets children under 14 years old out for walks with a parent. Factory and construction workers have already been allowed back to their jobs.

GENEVA — The World Health Organization chief says he hopes the United States will reconsider its freeze in funding for his agency and vowed to keep working on “saving lives” despite calls for his resignation from some U.S. lawmakers.

WHO Director-General Tedros Adhanom Ghebreyesus says he hopes the U.S. believes WHO is “an important investment, not just to help others, but for the U.S. to stay safe” amid the coronavirus outbreak.

President Donald Trump last week announced a temporary halt to funding for the U.N. health agency from the United States — its biggest donor — alleging a WHO cover-up and missteps handling the outbreak.

On Wednesday, Secretary of State Mike Pompeo reiterated some of the U.S. allegations, while other U.S. officials said the halt involved new funding and was expected to continue for 60 to 90 days.

A group of Republican lawmakers in the House of Representatives last week suggested that Trump condition any voluntary U.S. contributions to the WHO this year on Tedros’ resignation.

Asked about whether he was considering that, Tedros said: “I will continue to work day and night because this is a blessed work, actually, and responsibility saving lives, and I will focus on that.”

The cats, which had mild respiratory illnesses and are expected to recover, are thought to have contracted the virus from people in their households or neighborhoods, the U.S. Department of Agriculture and the federal Centers for Disease Control and Prevention say.

The finding, which comes after positive tests in seven tigers and lions at the Bronx Zoo, add to a small number of confirmed cases of the virus in animals worldwide. U.S. authorities say that while it appears some animals can get the virus from people, there’s no indication the animals are transmitting it to human beings.

The two cats live in different parts of the state; the USDA and CDC wouldn’t say where specifically.

Authorities are recommending that any pet owners with COVID-19 avoid contact with their animals as much as possible, including wearing a face covering while caring for them.

ROME — Deaths in Italy related to the coronavirus pandemic topped 25,000 on Wednesday.

The number of dead and new positives continue to plateau for Italy, the first western country to be hit by the crisis. The civil protection agency reported 437 people had died with the virus in the last 25 hours, a 1.7% increase in the death toll to 25,085. The number of positive cases rose 1.5% to 183,857.

Pressure on health services continued to ease, with fewer people both hospitalized and in intensive care. Italy’s interior minister, meanwhile, confirmed that none of some 150 migrants rescued by an aid group and quarantined at sea have tested positive for the virus.