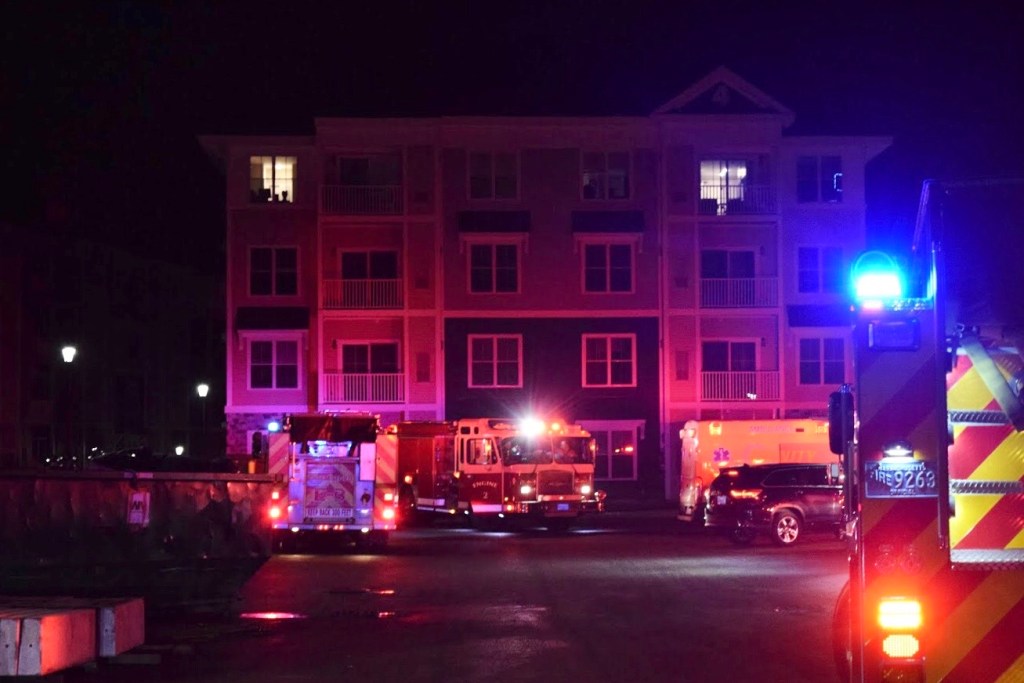 CHELMSFORD — A nearly 60-year-old Chelmsford woman was flown to a Boston trauma center by a MedFlight helicopter after firefighters pulled her from a 2-alarm fire in a fourth-floor apartment in a new Chelmsford apartment complex on Turnpike Road Friday night.

Fire Chief Gary Ryan said crews were called to The Kinloch Apartments at 104 Turnpike Road at 9:04 p.m., when a resident of the building reported that they smelled smoke.

Firefighters arrived to find a fire in a fourth-floor unit and woman suffering from “significant” burn injuries, according to Ryan. That woman was pulled from the apartment by firefighters and taken from the scene by TrinityEMS to 300 Apollo Drive in Chelmsford. From there a MedFlight helicopter flew her to an undisclosed Boston trauma center, according to Ryan.

Her condition was not immediately available. Emergency radio broadcasts indicated the woman had severe burns to her lower body and more moderate burns to her torso.

Ryan said a sprinkler system in the new building, which was constructed last year, largely controlled the blaze. The cause of the fire was under investigation Friday night.

There were few people other than first responders in the large, new development late Friday night after the fire was extinguished.

Building Inspector Shaun Shanahan said the unit where the fire was and units below it were damaged, one by fire and the others by water, but he said most residents of the 48-unit building would be able to return.

The building, set back from Turnpike Road by about 100 yards behind the development’s office, is one of three, four-story, 48-unit apartment buildings in the development, which was built last year for a total of about $38 million. There is also a 2-story, 24-unit building in the 168-unit development.

Some landscaping in the development is still being completed, and a pallet of uninstalled granite curbing sat in a parking lot near fire apparatus.

The development is owned by Kinloch Investments LLC, which is located on the property, according to online information from the Chelmsford Assessor’s Office.

Emergency crews and investigators were still at the scene late Friday night. Additional information was not immediately available.