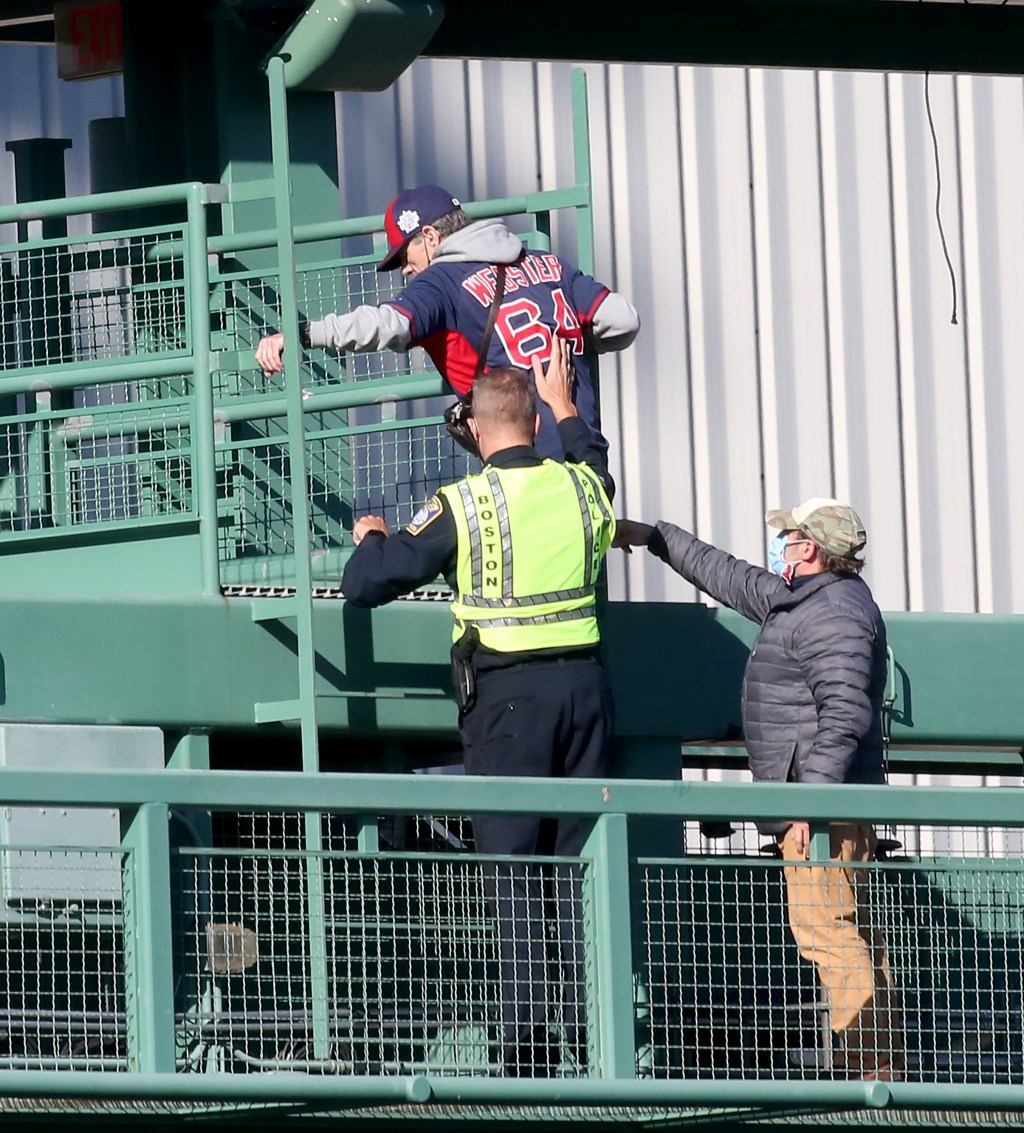 The Boston Police Department needed to secure a man who scaled the Green Monster and snuck into Fenway Park during the Red Sox’ 10-2 win over the Yankees on Sunday.

The game suffered a lengthy delay in the eighth inning when the man, wearing a Red Sox hat and jacket, climbed over a wall and down onto the camera well above the center-field bleachers.

The man appeared to throw an NYPD hat onto the field.

“During today’s game, a fan scaled the back of the Green Monster wall to access the ballpark and caused a stoppage to the game,” the Sox said in a statement, per MassLive.com. “Red Sox security and BPD quickly apprehended the fan who is now in police custody.”

Michael Chavis, who was standing in left field, said the man yelled at him.

“He was yelling that I’m not Michael Jordan because I wear No. 23 and my name is Michael,” Chavis said. “I don’t want to get too into it. I heard he’s safe now and nothing went wrong but there was a moment that it was a little concerning.

“I just saw him hop a wall and start yelling. Beyond that, I don’t know if he has superpowers or what. But he appeared. I’ll tell you that.”

It’s unclear how the man climbed a wall that’s 37 feet, 2 inches tall to sneak into the stadium.

“Just some guy climbing over the wall out there and getting into the camera well,” manager Ron Roenicke said. “And then you know, it becomes a hard thing for security to figure out what to do because you don’t want that guy falling off there. They couldn’t really go in and grab him because of where he was.”

Absolute madness at Fenway as someone appears to have broken into the stadium and is causing a ruckus pic.twitter.com/mmy11ij9x9

Chavis hasn’t been enjoying himself

It was a big day for Chavis, who also hit a pair of home runs to break out of a long funk.

Chavis finished with five RBI in the game.

It’s been a tough year for Chavis, who entered the game hitting .207 with a .584 OPS and just three homers.

“I had some really good conversations with some really great people and they gave me some really good advice. Yesterday I just kind of made the decision that I’m not going to let anybody else or anybody else’s decisions determine my happiness. So yesterday I went 0-for-3, but I had fun. I felt like I was able to compete. This sounds dumb, but when I’m having fun and I’m enjoying baseball, usually I play better and things work out. I had fun today. So just moving forward, I’m just going to try to enjoy this and win these last six games.”

He’s been back and forth crossing the Mendoza line with just six games left and needs to break free of some bad habits, hitting coach Tim Hyers said.

“It’s going to knock his confidence down and he starts to have doubt,” said Hyers. “And he’s a competitor and he’s wanting to put the team on his shoulders and produce for the fans and for this organization, and you try a little too much. I think that’s [what] some of the mechanical flaw is: I’m trying to hit it a little farther. I’m trying to hit the big home run, and you come out of your mechanics. You’re not relaxed. Trying to do too much, and he gets big and misses a few fastballs he should hit, and it kind of rolls downhill after that.”

Jackie Bradley Jr. was 4-for-5 to push his average to .274 with a .768 OPS as he finishes what could be his final week in a Red Sox uniform. He’s a free agent at season’s end.

“He’s got it going,” Roenicke said. “And we saw it last year, and the year before. He’s hitting the ball the other way. He’s squaring up almost all of his at-bats. And when he’d doing that, it’s really fun to see.”

Nick Pivetta will make his Red Sox debut on Tuesday as he makes the start against the Orioles.

Pivetta was acquired from the Phillies in the trade that sent Brandon Workman and Heath Hembree to Philadelphia. The 27-year-old hasn’t pitched since Aug. 10, when he allowed six runs and recorded just one out in his last appearance with the Phillies. The four-year big league veteran has a career 5.50 ERA.

Nathan Eovaldi will make his final start of the season Wednesday night.

The Sox could be without Alex Verdugo and Christian Arroyo in the final week.

Verdugo is still out with a hamstring injury and Arroyo is feeling back spasms. Neither one was available on Sunday.