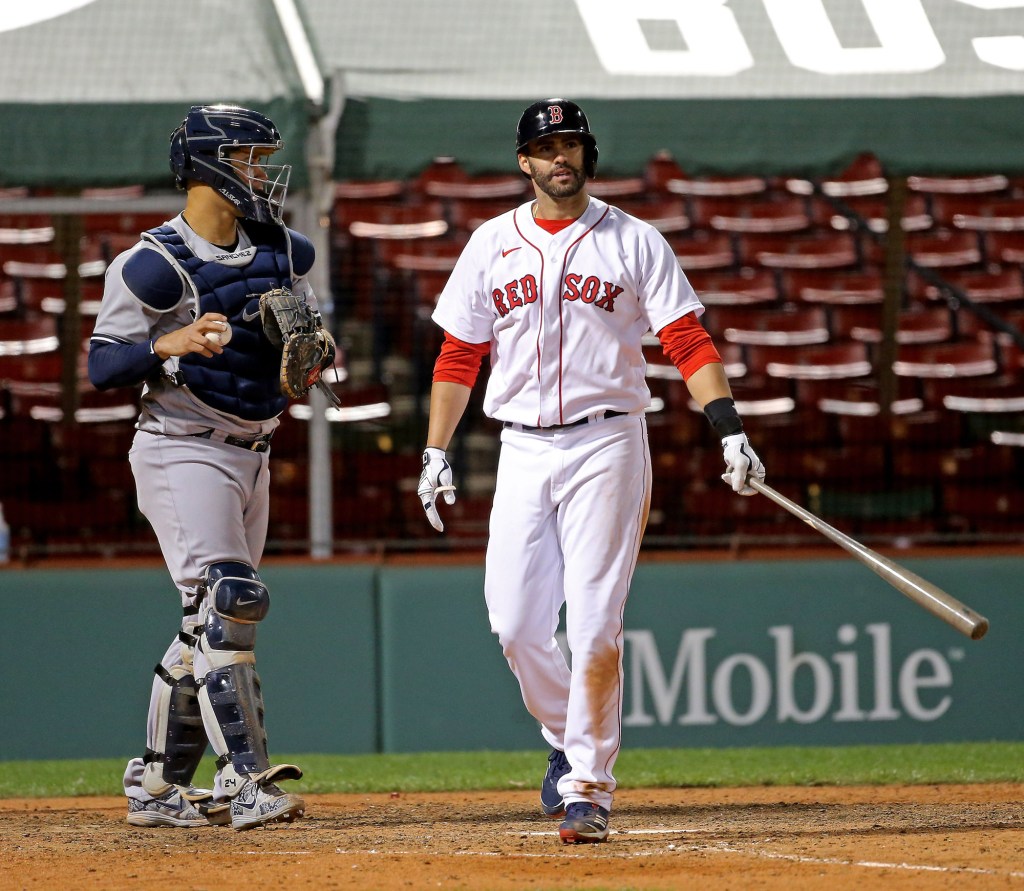 The most feared hitter in the Red Sox’ lineup the last two years — yes, even Mookie Betts often admitted Martinez was the heartbeat of those potent offenses — has become one of the worst hitters in baseball.

On Friday night, in a mid-September game between the Red Sox and Yankees, the Yankees looked at Martinez on the on-deck circle in the biggest spot of the game and basically said, “yes, we want him at the plate.”

The game was tied in the bottom of the 11th inning. The Sox had runners on the corners. Xander Bogaerts was up. And the Yankees told Bogaerts to take first base so they could face Martinez instead.

All the Sox needed was some contact to get the winning run home. But Martinez struck out swinging on a sinker in the bottom third of the strike zone. It was his fourth strikeout of the game. He finished 0-for-6 with nine men left on base.

It felt so predictable, too. That the Yankees knew they’d have their way with him rather than mess with Bogaerts spoke volumes. And with Martinez hitting in the middle of the order and looking as lost as he’s ever been as a big league hitter, the Red Sox offense has a giant void.

While the Red Sox might’ve been a tad disappointed (but probably not) had Martinez opted out after his first two brilliant seasons in Boston, there’s no chance the 33-year-old opts out this winter. Even with the National League adopting the designated hitter, how is he supposed to turn down the remaining two years, $38.7 million on his contract to test free agency in the middle of a global pandemic? Not coming off this season he’s had.

The Sox are stuck with him. And that’s not looking like a good thing as his bat speed slows down, his swings are too often underneath the ball and he offers little-to-nothing on defense.

“If we knew that, we would certainly fix it,” manager Ron Roenicke said after the Sox’ 6-5 loss on Friday. “It’s baffling to our hitting coaches, it’s baffling to us, and I’m sure it is to him also. Somehow we need to figure this out.”

Perhaps most concerning is that his exit velocity is as low as it’s ever been.

At 88.8 mph, it’s down 2.5 mph from the 91.3 mph average last year. His new exit velocity is basically league-average, ranking in the 53rd percentile. And when he’s not fast enough to leg out infield hits or stretch singles into doubles, and he’s not hitting the ball over the fence, those weak fly balls are resulting in one of the best hitters in MLB becoming one of the worst.

The numbers are the worst of his 10-year career, even worse than when he was with the Astros, the team that eventually released him.

“With a guy that’s been as consistent as he has over the years, to go through this little stretch is I’m sure pretty rough for him,” said Roenicke.

But it’s not a little stretch. The season is about two months old (or one third of a normal season) and Martinez isn’t getting any better.

He’s getting the ball in the air like he prefers to do — his flyball rate is actually up to 43% after being at 34% and 35% in his first two seasons in Boston — but the ball isn’t going anywhere.

And his 23% opposite-field rate is the lowest it’s been in seven years.

The ball is going straight, not very hard, and not very far.

“You keep thinking he’s going to come out of it,” Roenicke said. “He has some good games, then he doesn’t. Tough night. One of the best hitters in the game and he’s going through this.”

It’s staggering to look at the DH numbers across MLB and see the Red Sox ranking 28th in WAR from the position. And that’s with 15 National League teams that built their roster with no idea they’d be using the DH this season.

Martinez has spoken at length about how the new video system, which doesn’t allow players to access video of their at-bats during the game, is hurting his preparation.

Former teammate Kevin Pillar previously called out the excuse-making during a team meeting when he said he told the players it’s time to stop feeling sorry for themselves.

Roenicke agreed on Friday, saying the video changes “can’t cause all of this that’s going on (with Martinez). I know it doesn’t help him, what he’s used to, but there’s more to it than just that. He’s too good of a hitter to just have that bother him that much.”

Not this year, apparently.