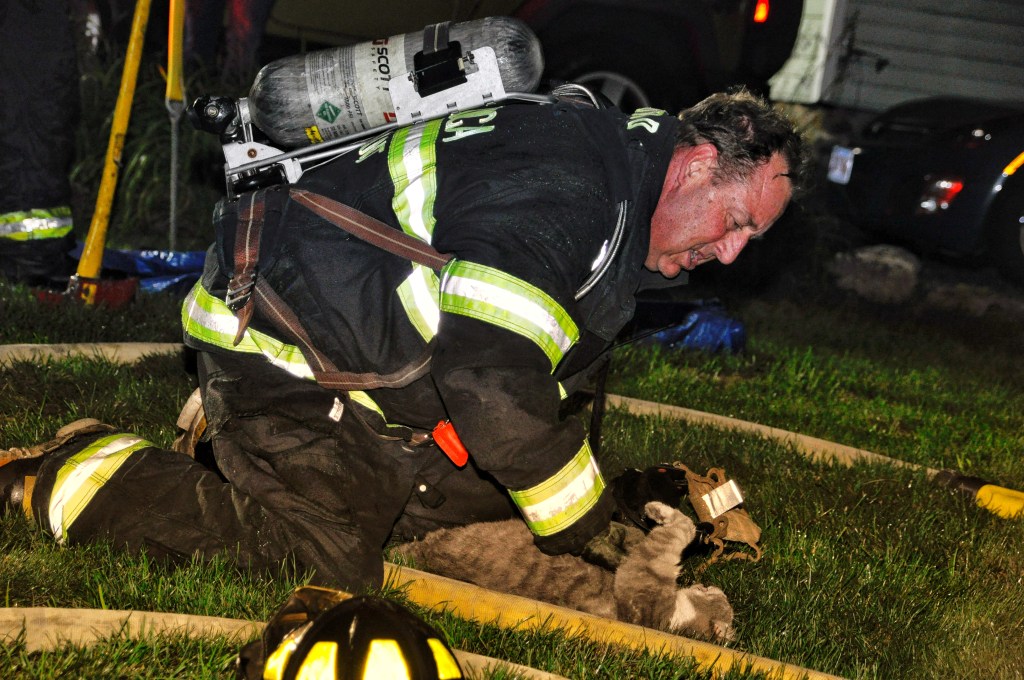 Those who know me well enough know of my love for cats.

We have had at least one feline friend in our home for 28 years, most of that time we’ve had two, and for a short time we had three.

I have been present for the deaths of three of my cats, and I cried each time.

I have a kitten calendar on my desk at the office.

Oh, I like dogs, too. If they could only go potty in a box like cats can.

It should come as no surprise, then, that my favorite news story of the past week was the Billerica firefighters performing CPR on at least one cat rescued from a burning house. One man in the house managed to get out, though he was severely burned, and there were several cats and dogs inside, as well, because the home served as a foster shelter for pets.

Three men from the Billerica Fire Department — firefighters Chuck McDevitt and Lawrence Bevis and Lt. Thomas Joyce — resuscitated the cat. They didn’t have to. A home was burning. While their comrades saw to that, they took the time to save a cat’s life.

They are my heroes.

And I will brook nobody telling me that the vast majority of firefighters and their brethren, police officers, are anything less than valuable public servants.

This ridiculous national attack on first responders has come home to roost locally, as it predictably would.

In Lowell, there are folks who say the Police Department is a racist organization (it’s not) and that Lowell is a racist town (it’s not) where racism should be declared a threat to public health.

Spare me. I’ve lived in this city my whole life. During that time, I’ve seen the city pick itself up by its bootstraps and improve itself in all areas. It still has a way to go, but it’s on the right path. There are people with racist beliefs in the city and, likely, in the Police Department. But racism does not run rampant in Lowell.

Black lives have always mattered in Lowell. That’s why, several years back, when a few students at Lowell High School wrote some nasty racist comments on social media about an African-American student running for class president, the city supported the teen. The issue was handled. One hopes it was just a case of misguided youths, as I know at least one of those kids was raised better than that.

But even if it wasn’t a case of kids being (really mean) kids, it shouldn’t — and doesn’t — reflect upon the city as a whole.

Lowell is a generous place. Ask any nonprofit that appeals to residents at crucial times, and they’ll tell you Lowellians step up, no matter what the cause or what color, race or nationality the recipient. The Sun Santa Fund is a testament to that.

In the 1980s, Lowell opened its arms to thousands of Southeast Asians as they fled despotic regimes in their homelands. Those people are now, for the most part, valued citizens and even elected officials.

Oh, racists are out there, in every walk of life, in every profession, piously praying in every church and walking the streets of every city and town.

Nobody is saying Lowell or its police or fire department — or that of any neighboring community, for that matter — is racism-free. No city or town can possibly be. You can’t legislate against racism. It has always existed, and it always will. It shouldn’t be tolerated, and in Lowell it isn’t.

So what’s it all got to do with cats?

Well, three grown men who are trained to save people’s lives thought it important enough to save the life of a cat. You won’t convince me that men with hearts like that have it in them to hate any living being.

We can’t ensure that every cop and firefighter is going to act above reproach at all times. They are only human, after all.

We can only try to ensure that we keep ourselves in check and that we stand against any public servant who goes beyond the law. You’ve seen the videos of the bad ones. Now watch the videos of the good ones, the cops and firefighters performing acts of bravery and compassion.

Anyone who has the compassion to save a cat in the midst of a major tragedy is a hero of mine. And I prefer to think that the vast majority of first responders — in your community and mine — are heroes.