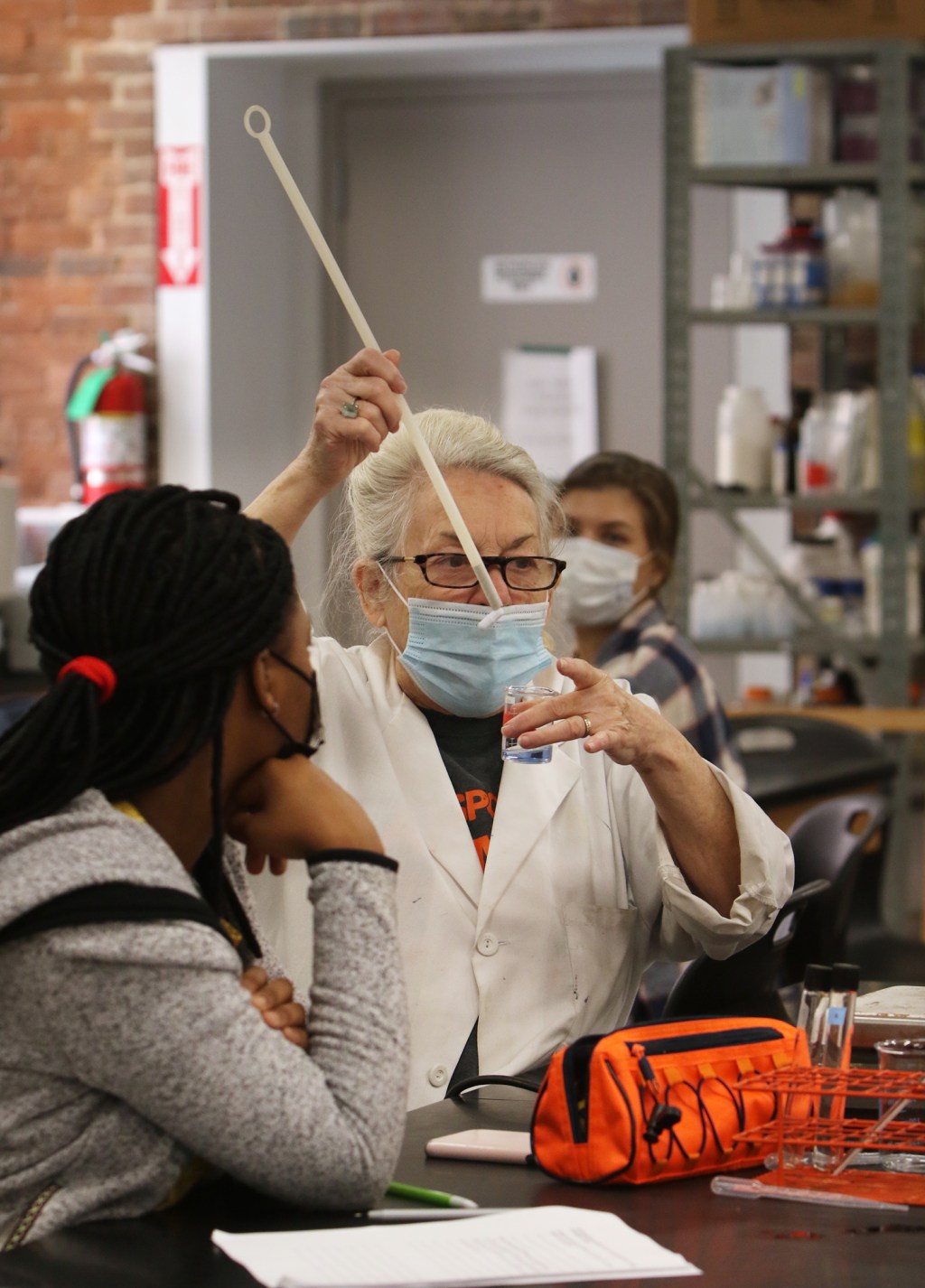 BEDFORD – From its beginnings as a small school serving less than 600 students in two rented buildings to now educating nearly 11,000 students across campuses in Bedford and Lowell, Middlesex Community College has stayed true to its mission of bringing educational opportunities to local residents of all ages and circumstances.

“It’s a place a student can go when they are 18 years old right out of high school, when they’re 25 and they need to take a few new courses for new technology, when they’re 50 and they get laid off from a job somewhere and have to retrain completely,” said Carole Cowan, who served as MCC president from 1990 to 2014.

Like other community colleges, MCC is a safety net for residents of the county, she said, and with that comes a “tremendous range of programming,” because the school has to be current with technologies and how to provide those services to students.

“Middlesex Community College is deeply embedded in the communities it serves, in that our graduates become the core of the workforce in the region, and also become key members of their communities,” MCC President James Mabry said, noting politicians, police and fire chiefs, many first responders, nurses and dental hygienists are among its alumni. “We help build strong communities.”

The college now occupies 18 properties across its two campuses, along with two historic homes owned by the Middlesex Community College Foundation, the Nesmith House in Lowell and the Middlesex Meetinghouse in Billerica.

Retired Middlesex Superior Court Judge Robert Barton, then chairman of the Bedford Board of Selectmen, helped to cut the ribbon marking the opening of MCC in two rented buildings at the Bedford Veterans Administration Hospital campus.

Barton later served on the MCC Board of Trustees for 10 years, followed by continuing involvement with the MCC Foundation, which raises money to assist MCC with programs, technology, building projects and scholarships.

He said the hope for MCC was that it would be an opportunity for those who couldn’t afford traditional college to further their education and gain good-paying jobs in such fields as dental technology, nursing and law. That remains true for many students attending MCC today.

Portia Phok, 18, of Lowell, is attending MCC now to complete her prerequisite courses and plans to enroll in the diagnostic medical stenography program next fall. She’s working two jobs, as a waitress and in retail, to put herself through school, and said her professors and advisers have been very accommodating of her schedule.

Phok said her ultimate goal is to earn her doctorate to become a pediatrician, but she plans to enter the workforce as an ultrasound tech after earning her associate degree so she can earn the money to fund her future education.

“I don’t have to wait eight years in order to get paid as much as someone in the medical field,” Phok said.

In many ways, MCC has been ahead of its time and a pioneer among its peers in the community college system.

Cowan said it was the first to engage in workforce development by running programs for industry, to run career centers, to do programming internationally, to charter an alternative high school and to bond for the construction of its own buildings.

“Just about anything new and different, Middlesex was involved in,” Cowan said.

Since 1992, MCC has provided International Education Fellowships for students to visit a number of foreign countries from Belize to China and study the local history and culture.

MCC has served a wide range of students through online programs for the last 20 years, Mabry said. Between that history and efforts in recent years to use federal grants to bring in new technologies, MCC has been able to effectively meet student needs and hold classes online throughout the pandemic, he said.

The college upgraded its online teaching platform to Blackboard Ultra, providing the latest technology for faculty in teaching online courses, Mabry said. He said they also built a virtual advising platform and instituted a customer relations management system for student affairs and admissions.

Mabry said MCC’s ability to quickly react to the pandemic shows its innovative nature and resiliency, and that “we will be able to adjust to whatever circumstances are thrown our way to continue our mission to help our students succeed.”

Over the course of Mabry’s tenure, he said MCC has more than quadrupled the size of its high school program, allowing high school students opportunities to gain college credit through dual enrollment and other offerings. MCC offers credit courses through 23 area high schools, serving more than 1,000 students across the region, he said.

“This has really allowed many more students low-cost access to college courses so that they can get a head start on building their college career,” Mabry said.

Mabry said his administration has spent considerable time and effort to rebuild instructional spaces and install modern technology in classrooms, including rebuilding the nursing and dental labs and a new biotechnology lab in Lowell.

He said they have also built a robust alumni society that is now planning events and recruiting members throughout the year. Mabry said MCC’s numerous local alumni “are our biggest supporters and our biggest recruiters,” often returning to take additional credits and sending their own children to the school.

It was through a family friend that had gone through MCC’s nursing program that Samantha Martinez, 18, of Methuen, came to know about the school. The new freshman said she was also attracted by MCC’s transfer partnership with UMass Lowell, and plans to continue her education at the university after she graduates from MCC. Martinez said she is interested in becoming a registered nurse and working in a maternity ward.

In late 2017, MCC, along with partner Northeastern University, were awarded a $5 million grant over five years from the National Science Foundation to strengthen the STEM programs at both institutions and provide workforce development opportunities for minority students, Campbell said.

Similar to MCC’s arrangement with UMass Lowell, the agreement created transfer pathways for students interested in turning their associate degrees in biotechnology and information technology into bachelor degrees.

Board of trustees Chairman James Campbell said MCC has garnered an excellent reputation and is regarded as Massachusetts’ flagship community college, always ranking high in graduation and retention rates and other criteria measured by the state Board of Education. MCC has also been recognized by many national organizations that rate colleges as the best in the state, he said.

Campbell was Lowell city manager when MCC was looking to come to Lowell, and worked with state and federal officials to assist in establishing a campus in the city. He’s been involved with MCC in different ways for 35 years.

“In a relatively short period of time MCC has grown from a small satellite presence in Lowell consisting of a one-room classroom located in the Wannalancit Mills to a major economic engine that employees over 500 people,” Campbell said, noting MCC has added almost $300 million yearly to the local economy.

After the state secured the former Marist Preparatory Seminary in Bedford in 1988 to become the permanent main campus for MCC, the college set its sights on obtaining properties in Lowell. In 1990, the college purchased the former Wang Laboratories training center at Kearney Square, now known as the Cowan Center. Over the years it added six more buildings in downtown Lowell, the most recent being its Donahue Academic Arts Center in the former Boston & Maine railroad depot.

Mabry and the board of trustees will mark MCC’s 50th anniversary at a virtual meeting Thursday morning, along with the alumni board that will meet the same day.

Though the coronavirus pandemic has changed how MCC might normally mark such a milestone, Campbell said they still want to have a “vigorous celebration.”

“COVID has asked us to be more innovative and work more in the virtual environment, and we will be using a wide range of virtual platforms to both communicate the value and the worth of the college after 50 years, and also to celebrate the faculty and staff and students who have come through and made an impact on our college and on our communities,” Mabry said.

Now, as Mabry is about to leave at the end of the school year, the trustees seek to find a new leader who can continue MCC’s path of success. When the trustees meet Thursday, they hope to select the search firm that will assist them in that goal.

Cowan said she believes MCC’s best years “are still ahead.”

“It’s a very tenuous time for our country and our economy, and community colleges are going to be more important than ever,” she said.

Visit https://www.middlesex.mass.edu/50th/ for more information about the 50th anniversary celebration.