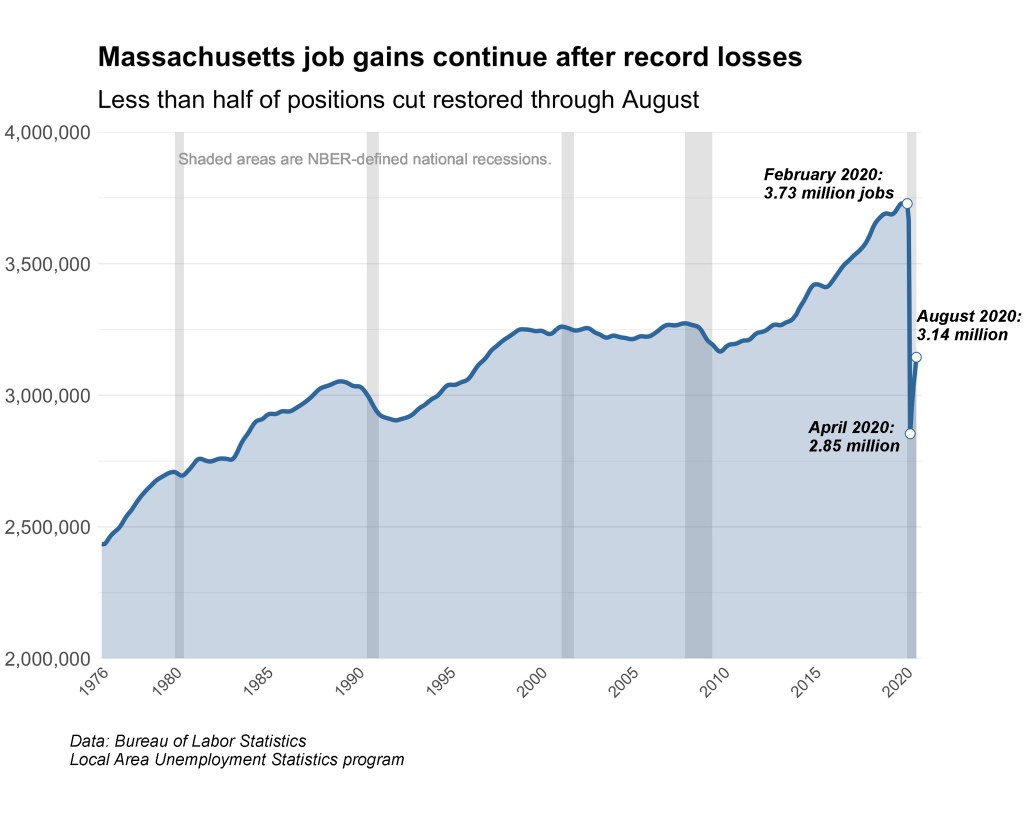 New preliminary jobs data released Friday by federal and state officials showed month-over-month improvement through the late summer amid the economic chaos wrought by the COVID-19 pandemic. The state’s unemployment rate dropped from a revised rate of 16.2 percent in July to 11.3 percent in August, officials said. That 4.9 percentage point change was the largest decrease in the country.

Almost all of the 51,600 positions added in August came in the private sector, according to data from the state Executive Office of Labor and Workforce Development. The largest gains occurred in education and health services, leisure and hospitality, and trade, transportation and utilities, while only one of the industry groups tracked, financial activities, reported losses in August.

The labor force household survey estimated total employment in Massachusetts to be 3.14 million in August, with 65,500 more people employed than in July. According to that series, the state has added back about 290,000 jobs of the more than 870,000 jobs lost in the first two months of the pandemic.

Meanwhile, the employer survey estimated Massachusetts had 3.29 million nonfarm employees in August, 51,600 more than last month. Under that data series, the Bay State has gained back 272,000 of about 690,000 jobs lost.

Officials used figures from both programs in Friday’s release. The state labor office cited 51,600 jobs gained based on the employer survey and also said that total August employment was 3.14 million based on the household survey.

Through July, the economic damage from the pandemic had been felt more acutely in cities and in communities of color. Eight of the 10 communities with the highest unemployment rates in July have majority nonwhite populations.

August job gains, which are critical to the tens of thousands of workers affected and to the state’s overall recovery, come as Beacon Hill tries to figure out how to address key budget uncertainties. Lawmakers may need to make tough decisions on whether to impose tax hikes or scale back state services amid the economic jolt.

Tax collections have fared better than projected at the beginning of the crisis, but Sen. Michael Rodrigues — his chamber’s top budget official — said this week that he expects revenues to drop $5 billion below last year. The state will likely need to dip “deeply” into its $3.5 billion emergency savings fund without additional federal aid, Rodrigues said.

Senate President Karen Spilka, meanwhile, said Friday that she is optimistic another federal relief package will come from Congress.

Another key question the Legislature will need to answer is whether to step in and relieve businesses from an impending hike in the taxes they pay toward unemployment insurance.

Due to the unprecedented surge in joblessness, the Baker administration projects that the unemployment insurance trust fund will end 2020 nearly $2.5 billion in the red, triggering an increase of almost 60 percent in the per-employee contribution employers pay.

Sen. Patricia Jehlen, who co-chairs the Labor and Workforce Development Committee, said last month that she believes the Legislature will seek a rate freeze but needs federal assistance to make such a move possible.