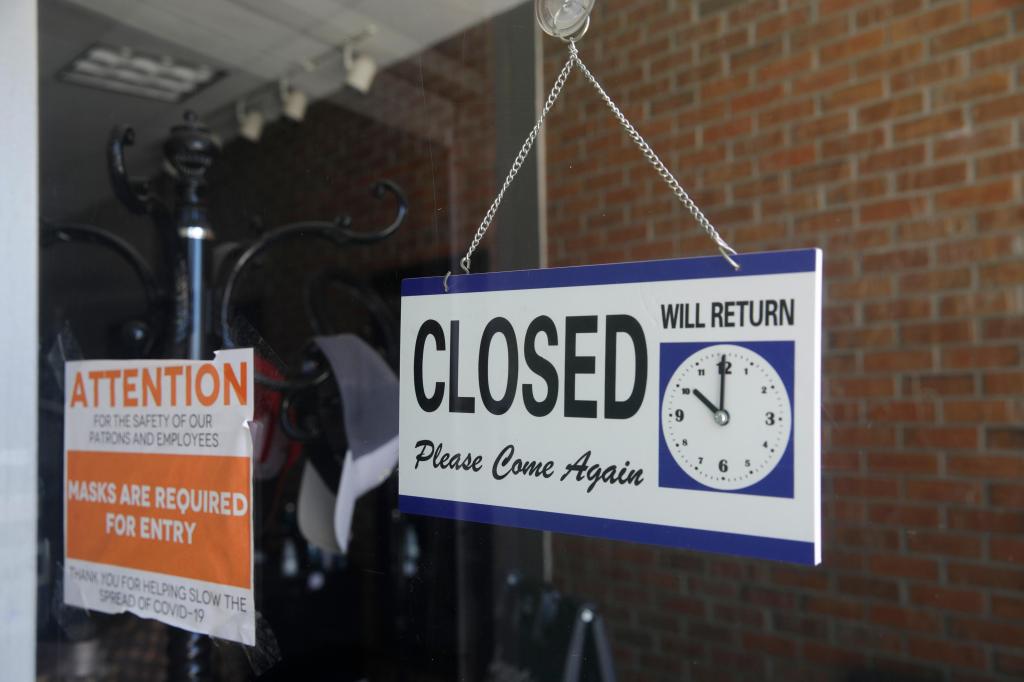 By CHRISTOPHER RUGABER and MARYCLAIRE DALE

WASHINGTON (AP) — The number of people seeking U.S. unemployment aid rose slightly last week to 870,000, a historically high figure that shows that the viral pandemic is still squeezing restaurants, airlines, hotels and many other businesses six months after it first erupted.

The figure coincides with evidence that some newly laid-off Americans are facing delays in receiving unemployment benefits as state agencies intensify efforts to combat fraudulent applications and clear their pipelines of a backlog of jobless claims.

California has said it will stop processing new applications for two weeks as it seeks to reduce backlogs and prevent fraudulent claims. Pennsylvania has found that up to 10,000 inmates are improperly receiving aid.

The Labor Department said Thursday that the number of people who are continuing to receive unemployment benefits declined to 12.6 million. The steady decline in that figure over the past several months reflects that some of the unemployed are being re-hired. Yet it also indicates that others have exhausted their regular jobless aid, which last six months in most states.

In addition to those receiving aid on state programs, about 105,000 others were added to an extended jobless-benefits program that provides 13 additional weeks of aid. This program, established in the economic relief package that Congress passed earlier this year, is now paying benefits to 1.6 million people.

Applications for jobless aid soared in the spring after the viral outbreak suddenly shut down businesses across the country, slashed tens of millions of jobs and triggered a deep recession. Since then, as states have slowly reopened their economies, about half the jobs that were initially lost have been recovered.

Yet job growth has been slowing. In most sectors of the economy, employers appear reluctant to hire new workers in the face of deep uncertainty about the course of the virus.

The growing concerns about fraudulent applications for unemployment benefits have focused mainly on a new program, Pandemic Unemployment Assistance. This program made self-employed people, gig workers and contractors eligible for jobless aid for the first time.

Though roughly 14 million people are classified as receiving aid under that program, economists increasingly regard that figure as unreliable and likely inflated by both fraudulent applications and inaccurate counts. The number of people receiving benefits under the PUA program is probably overstated by several million, economists say.

Thursday’s report from the government comes against the backdrop of an economy that has been recovering fitfully from a catastrophic recession. Some economic barometers, like housing, retail purchases and auto sales, have managed to produce solid gains. But with unemployment elevated at 8.4% and a key federal jobless benefit having expired, the economy’s gains are believed to be slowing.

Most economists say it will be hard for the job market or the economy to sustain any recovery unless Congress enacts another rescue aid package for struggling individuals, businesses and states. Ultimately, an effective vaccine will likely be needed for the economy to fully regain its health.

In the meantime, California and other states are trying to manage their beleaguered jobless benefits programs.

Sharon Hilliard, director of California’s Employment Development Department, said her agency would stop accepting applications for aid for two weeks while it adopts reforms recommended by a state task force. The department will try to clear a backlog of nearly 600,000 first-time applications and review about 1 million people who have received unemployment benefits but whose cases have come under scrutiny.

These people include gig workers and contractors who have more difficulty verifying their income than do traditional employees whose tax forms are on file with the state.

Kimberly Maldonado, a 31-year-old out-of-work music instructor, is among the thousands of Californians whose unemployment aid is tied up by bureaucratic snags and the state’s decision to suspend the processing of new applications.

Maldonado applied for benefits four weeks ago. She said she calls daily to check on the status yet reaches only a recording that says the department is overwhelmed. For her, the wait is growing critical.

“It’s literally the difference between food on my table or not,” says Maldonado, who lives in Placentia. “I’ve got a 2-year-old, and I’m not really sure how I pay for anything in the coming weeks.”

Other state unemployment agencies, too, suspect that they have been bedeviled by fraud since the pandemic intensified in March. As tens of millions were laid off, applications for aid overwhelmed the agencies, which just weeks earlier had been operating with the lowest unemployment rates in 50 years. A $600-a-week federal unemployment benefit, on top of regular state benefits, provided an added incentive to apply for aid.

Washington was the first state to be hit as an international fraud ring based in Nigeria managed to steal up to $650 million in benefit payments, although at least half that money has been recovered. Texas, Florida and Oklahoma have been hit, too.

In Pennsylvania, investigators are detecting rising evidence of fraud. On Wednesday, state officials announced that 18 state prison inmates and two girlfriends of inmates on the outside had been charged in what officials described as a scheme to fraudulently obtain jobless benefits for ineligible prisoners.

After cross-checking unemployment applications with state prison rolls, they found 10,000 people on both lists — more than one-fifth of the state’s prison population. The 20 people who were charged Wednesday had sought a combined $300,000 in money from the Pandemic Unemployment Assistance program, state Attorney General Josh Shapiro said.

State Rep. Sheryl Delozier was the victim of a more sophisticated scheme. This summer, she got word from tenants that she had important-looking mail at a property she rents out: Envelopes containing two checks totaling $7,100 for retroactive pandemic unemployment payments. She had never applied for the money.

The plot was thwarted, Delozier believes, by the state’s decision to send applicants’ first payments by mail before allowing them to switch to online payments. Delozier alerted officials and returned the checks.