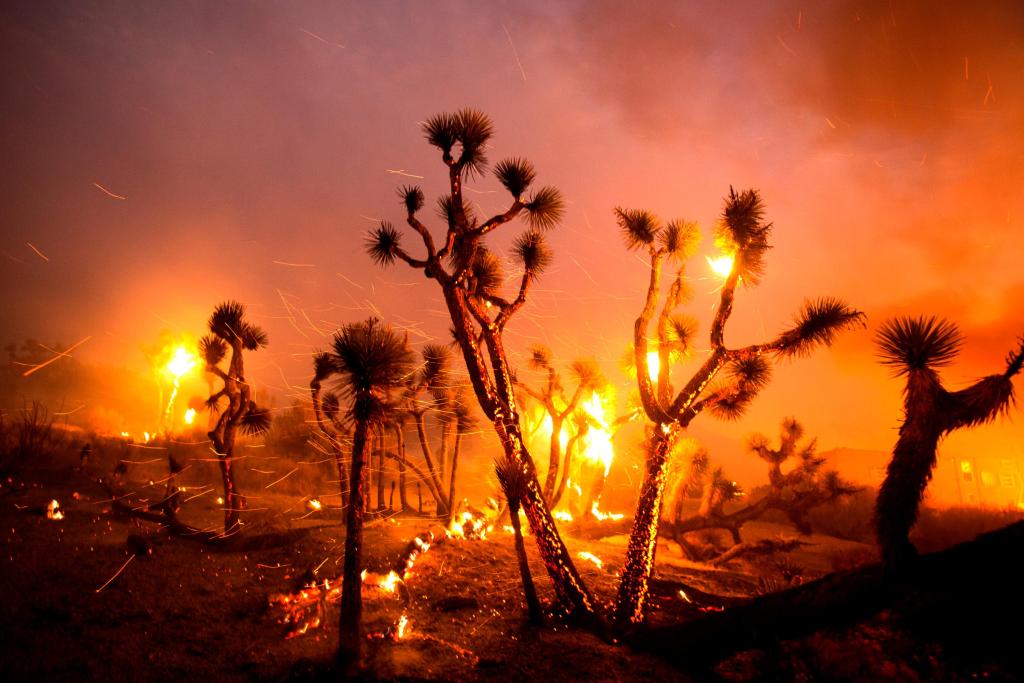 JUNIPER HILLS, Calif. (AP) — Strong winds pushed a wildfire burning for nearly two weeks in mountains northeast of Los Angeles onto the desert floor and spread it rapidly in several directions, causing it to explode in size and destroy homes, officials said Saturday.

Meanwhile, officials were investigating the death of a firefighter on the lines of another Southern California wildfire that erupted earlier this month from a smoke-generating pyrotechnic device used by a couple to reveal their baby’s gender.

In northern Los Angeles County, erratic winds pushed the Bobcat Fire onto the Mojave Desert community of Juniper Hills on Friday after churning all the way across the San Gabriel Mountains. The winds and thick smoke over the area grounded water-dropping aircraft most of the day. Meanwhile, crews on the ground shifted from attacking the blaze to protecting homes because they were “outflanked” by the flames, fire spokeswoman Kerry Gillibrand said.

Some residents in Juniper Hills fled as blowing embers sparked spot fires, hitting some homes but sparing others. Bridget Lensing said she feared her family’s house was lost after seeing on Twitter that a neighbor’s house three doors down went up in flames.

“The past year, I poured my heart and soul into improving this home,” Lensing said. “And it could be ripped away so quickly.”

It wasn’t immediately clear how many homes were burned in the area about 50 miles (80 kilometers) northeast of downtown LA. A crew will assess damages once the area is cleared of danger, said fire spokesman Sky Cornell. No injuries were reported.

He said crews will take advantage of slightly cooler temperatures to make headway on Saturday. However, winds were expected to remain strong with possible gusts of up to 25 mph.

On the south side of the blaze, firefighters continued to protect Mount Wilson, which overlooks greater Los Angeles and has a historic observatory founded more than a century ago and numerous broadcast antennas serving Southern California.

The fire that started Sept. 6 had already doubled in size over the last week. It is 15% contained.

Officials said the fire has been challenging because it is burning in areas that have not burned in decades, and because the firestorms across California have limited resources. There were about 1,660 firefighters on the lines.

The name of the firefighter killed in the nearby El Dorado Fire was being withheld until family members are notified.

No other information was released about the firefighter, the agency the firefighter worked for, or the circumstances of the death. The body was escorted down the mountain in a procession of first-responder vehicles.

A statement from the California Department of Forestry and Fire Protection, or Cal Fire, said it was the 26th death involving wildfires besieging the state.

More than 7,900 wildfires have burned more than 5,468 square miles (14,164 square kilometers) in California this year, including many since a mid-August barrage of dry lightning ignited parched vegetation.

The El Dorado Fire has burned more than 34 square miles (89 square kilometers) and was 59% contained, with 10 buildings destroyed and six damaged.