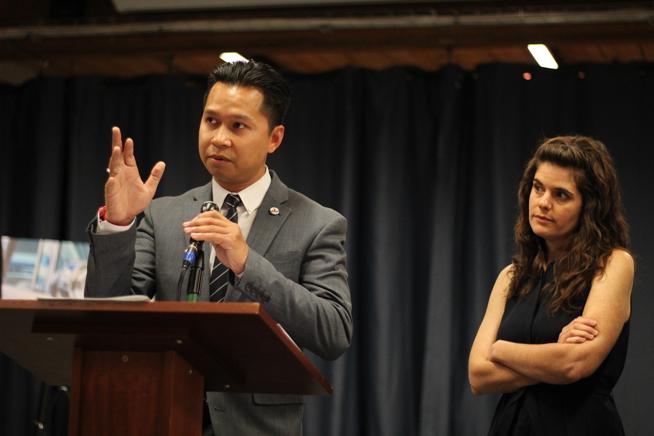 The organizations said Lowell residents recently received applications fully translated in both English and Spanish, but not in Khmer.

The city near the New Hampshire state line is home to one of the largest populations of Cambodian immigrants in the country, with many families coming as refugees after the Vietnam War.

“There is no excuse for the Secretary’s disenfranchisement of Khmer-speaking voters,” said Oren Sellstrom, of the Boston-based Lawyers for Civil Rights, noting Galvin’s office has received more than $8 million in federal funding and $5 million from the state for coronavirus-related expenses. “He must fix this mistake now, while there is still time to do so.”

Debra O’Malley, a spokeswoman for Galvin’s office, said mailers sent out in Lowell weeks ago included information in Khmer, and thousands of them have already been returned to the city’s Elections Commission.

She also said the Khmer-language application can also be found at www.MailMyBallotMA.com, and that the office has Khmer interpreters available to answer any questions.

Sellstrom responded that the mailers only included a short statement in Khmer pointing voter to the Secretary of State’s website.

“What the law requires is a fully-translated application — obviously much more accessible and necessary to ensure equal voting opportunity,” he said via email.

Civil rights and minority groups previously appealed to the state’s Supreme Judicial Court to get Galvin’s office to send out the mail ballot applications to every voter in the state by the July 15 deadline in the emergency legislation.