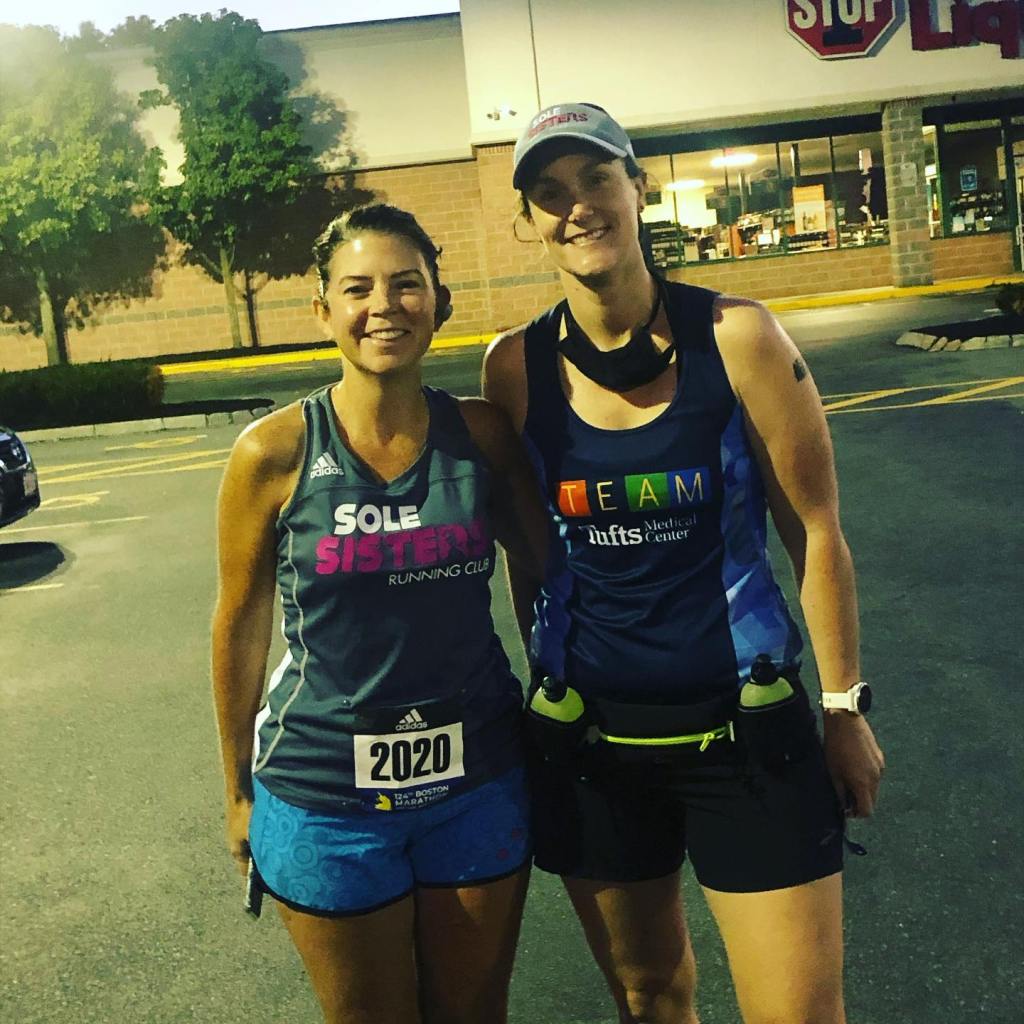 Last Saturday, Kristen Kelley and Kim O’Hanlon turned the streets of Tewksbury into their own personal Boston Marathon.

Kelley, a Tewksbury native and Lowell resident, and O’Hanlon, a Tewksbury resident, are members of the Wilmington-based Sole Sisters Running Club. They had spent the winter training for their first-ever Boston Marathon and were prepared to toe the starting line in the 124th running of the prestigious event that was originally scheduled for April 20, 2020. However, the COVID-19 pandemic caused the race to be postponed to Sept. 14, and then that date also got canceled, making this year’s edition a virtual race that required participants to complete a continuous marathon within a six-hour time period any time between Sept. 7 and 14.

Kelley and O’Hanlon were certainly frustrated that they wouldn’t get to taste a true Boston Marathon, but they decided to make the most of it. They mapped out their own course that started last Saturday at 6 a.m. at Perfecto’s Caffe in Tewksbury and ended at the Market Basket parking lot, using familiar training loops along the way. The majority of the running was done in Tewksbury, with parts in Andover and Wilmington.

While it wasn’t quite the same thrill as finishing the race on Boylston Street in front of thousands of cheering spectators, Kelley and O’Hanlon still enjoyed a memorable experience.

The day began with a police motorcycle escort to stop the intersections. There were water stops along the course that came complete with cheering sections comprised of family and friends, balloons, loud music, signs and even costumes There were also personalized mile markers along the entire course. At the finish line, both Kelley and O’Hanlon got to break the tape, as though they won the race.

“It was pretty awesome,” said the 47-year-old Kelley. “I was really worried going into it that we were going to be alone out there and that the spirit wouldn’t be the same. But we had a lot of support from friends and family, and the Sole Sisters Running Club.

“That’s probably the first and last time that I’ll ever get to break the tape at a race. That was pretty cool.”

Kelley and O’Hanlon will be receiving a medal and shirt from the Boston Athletic Association after they submit their race times.

“That was one thing we thought might stink, that we wouldn’t get that medal when we finished it,” said Kelley, who received an invitational entry from the B.A.A. to run the marathon on behalf of the Sole Sisters Running Club. “Honestly, I think it still might’ve been a little bit better experience because we never would’ve had that support at Boston. There’s no way my friends and family would’ve been at the finish line and would’ve been able to follow me on the course. Boston is a jammed race.”

O’Hanlon, 35, is a charity runner and raised close to $8,000 for Tufts Medical Center. She ran in honor of her son Max, who passed away in May of 2016 at just 18 months old from Krabbe Leukodystrophy.

“It was really nice. A lot of friends came out — there was a shocking number of people out there with signs, people running with us for parts,” said O’Hanlon. “I was running in memory of my son, so I’m glad I got to do something and I’m glad people came out. We got some closure and we did what we set out to do.

“It was a really fantastic day, I can’t complain at all.”

O’Hanlon, an engineer for a company based out of Pennsylvania, is originally from New Jersey and has lived in Tewksbury for five years. She took up running when she moved to the area as a means to get to know people. She said she’d like to do more marathons going forward, but also said it doesn’t necessarily have to be Boston.

Kelley started running when she was 40. As she improved and increased her mileage, she set the Boston Marathon as a goal.

“It’s been a challenge trying to get there, because, you know, I’m not fast,” Kelley joked. “So I had to make the decision whether I wanted to raise a lot of money for charity. But because I do a lot of volunteer work for my club, the Boston Athletic Association awards invitational entries from the different clubs, so I was able to get in that way.

“But I had to prove myself to my club. I did the Baystate Marathon (in Lowell) last year because they kind of want to know that you can do a marathon.”

When asked if she’ll attempt to run Boston again, she gives an answer almost before the questions ends.

“I still have to check Boston off the list.”