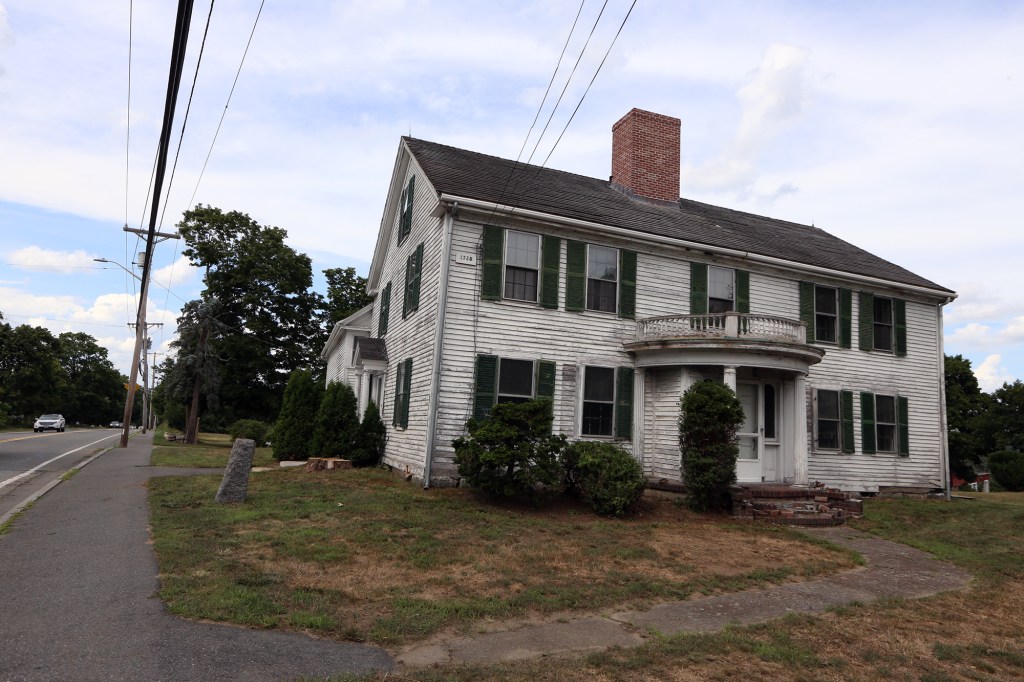 DRACUT – The view from Beaver Brook Farmhouse on Mammoth Road seems untouched by centuries of history, but the house itself has not fared nearly as well.

Driving onto the property on a recent 90-degree July afternoon, visitors were welcomed by a timeless view of rural New England.

Also known as the Justus Richardson House, the dwelling dates to the 1730s with some additions over time. It was originally built and owned by the Varnum family. The farmhouse and just under 1 acre of the land surrounding it are in need of a buyer.

The view is guaranteed because Dracut will retain the other 22 acres for open space, recreational and preservation purposes. The house itself is in need of substantial capital improvements, structural work and rehabilitation. It is being sold “as is.”

Town Manager Ann Vandal and Selectmen Chair Jessie Forcier walked the visitor around the house, which has been unoccupied for at least a year.

Walking through the house it becomes clear that this is more than a This Old House project, although Vandal spoke wistfully of Bob Villa, original host of the famous PBS show. It is actually quite remarkable that a caretaker lived in the house until recently.

Considering the temperature outside, the interior was comfortable. The air, however,  was stuffy because the house has been shut  for so long. The rooms are spacious, but large chips of ceiling paint cover the floors of most rooms. Walls are papered with 18th and 19th century motifs over several layers of older wallpaper.

Many features are built into the walls including shelves, curio cabinets and a china cabinet. “Everything is built in,” Vandal says. The kitchen even has space for a small microwave cut into the wall, a late 20th century improvement.

Crown molding, some of it in need of repair, helps frame doorways.

Vandal points to paneled doors and notes that if replacement is needed, the work will have to replicate the original exactly. “A good craftsman can do that easily, though.”

The town acquired the property in 2015 under the provisions of the Community Preservation Act after the 2013 death of George B. Richardson at the age of 99.

His obituary published in November 2013 says, “After his graduation (from Mt. Hermon Prep School) he returned to his family farm, Beaver Brook Farm in Dracut on Mammoth Road. George’s great-grandfather (Justus Richardson) traveled to California during the California Gold Rush where his great-grandfather struck gold worth $5,000.

“When his great-grandfather returned to Dracut, he bought the farm. The farm supplied milk to St. Joseph Hospital daily and also grew squash that fed many people during WWI and WWII.”  A squash barn and greenhouse are structures on the land that the town is retaining.

Because the town acquired the property using Community Preservation Act funding, the house and land are subject to a preservation restriction.

The town published a request for proposals with final submissions required by Aug. 18.

Vandal hopes that a buyer emerges who not only has the funding to do the extensive work required but also to live in the house.

Talking about who might be a potential buyer, Forcier says, “It’s a lifestyle thing.”  The buyer will be someone who loves Colonial-era architecture and design. There will not be scope under the preservation restriction to tear down walls for an open space look.

The house is not a suitable candidate to serve as an historic museum because, among other reasons, it would be difficult to adapt to requirements of the Americans with Disabilities Act.

The RFP spells out in detail what the town expects to be done according to a 10-year timeline. “It doesn’t all have to be done at once,” Vandal says.

The property is zoned R2, which allows multi-family houses in the area, but the preservation restriction bars that use for the farmhouse.

The R2 zoning would prohibit “someone from buying the house and turning it into a candle shop,” Forcier notes.

The RFP makes it clear that “the easiest and least destructive use of an historic building is for its original use” and commits the town to preserving the farmhouse’s historic features from any future inroads of time.