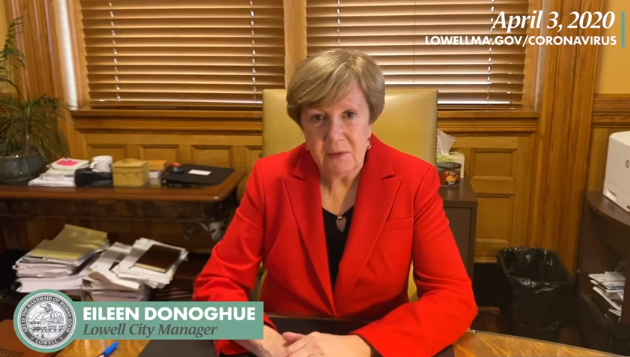 LOWELL — City Manager Eileen Donoghue said she feels for students and parents who were told they would have in person teaching when school started, and that she told Superintendent Joel Boyd that she disagreed with the decision to cancel in-person classes at the last minute due to a lack of air purifiers.

She also, in a conversation that focused mostly on the city’s nearly $440 million Fiscal 2021 budget, said that thanks to record funds in city emergency accounts, layoffs can be avoided in Fiscal 2021 despite the COVID-19 pandemic, as long as city unions agree to about $1.3 million in concessions the city is counting on.

“We are looking for those concessions so that we can save jobs,” Donoghue said, though she said ongoing negotiations prevented her from sharing more specifics.

The budget goes before the City Council for a public hearing Tuesday evening.

Donoghue discussed the latest school developments, and the budget, during a conference call late Thursday with Sun editors and reporters.

Donoghue minced no words when asked how she felt about Boyd’s decision to cancel in-person classes just two days before they were scheduled to begin.

“The superintendent felt that unless he had air purifiers he wasn’t going to open. I respectfully disagreed with that. I told him so,” Donoghue said. “It was his call, but I very much disagreed with it because it’s not necessary for opening schools.”

She expressed special concern for the students and families who were counting on being in school.

“I’m very, very concerned that that’s not happening because the impact on the families is tremendous. Not just the working parents, I empathize with them, but I also empathize with the kids who want to be in school, who need to be in school,” Donoghue said. “I think the goal is to get them into schools, period. And if a family really wants to be remote then I applaud that decision, but we need to give families the option to be either remote or in person, and that’s not what happened here.”

Donoghue said she agreed that the city would pay for 1,000 air purifiers since the school department wanted them, but that the devices are not required by the Department of Elementary and Secondary Education, or any other body, in order to safely resume in-person teaching.

“I didn’t do it with the idea that, if for some reason the supply chain can’t locate them, we won’t open the schools again,” Donoghue said. “Never in my wildest dreams did I expect that.”

Asked if she believes a lack of air purifiers was really the issue, Donoghue detailed work the city has done in school buildings this year, from fixing windows and vents, to having two roofs and several HVAC systems replaced, and said she too has heard from people who claim there are other readiness and scheduling issues.

“I take him at his word,” Donoghue said. “He (Boyd) says what he needed for classrooms is ready, and that they still are ready when we get purifiers.”

Donoghue said she does take issue, though, with anyone who suggests the school buildings aren’t safe without air purifiers, especially when she said DESE recommends opening windows and ensuring good ventilation as more effective options.

“I made a commitment that we would comply with all the suggestions of DESE, and we have done that for ventilation and air quality in the schools. We have followed it and I can lay it out and prove it to anybody,” Donoghue said. “It’s important that fact is clear because I think there’s an attempt to cause fear in the community that these buildings are unsafe to be in. That’s not true, so that part I do take issue with.”

Donoghue also said United Teachers of Lowell President Paul Georges’ claims that she refused to allow an independent third party to evaluate schools were completely untrue, and said the city had already hired a third-party engineering firm to review the various HVAC and ventilation systems in all of the city’s schools before the UTL even requested it. She said she simply declined to have another firm do the same job at the union’s later request.

“Why would we pay two firms to do the same thing,” Donoghue said. “That’s just economic waste.”

Donoghue and Chief Financial Officer Conor Baldwin spent much of the hour-long conversation touting their work last year to tighten up the city’s budget, which they say led to historically large reserves.

“We’re lucky we did have positive reserves because this would be much more painful if we didn’t,” Donoghue said.

Donoghue said that, heading into the beginning of the Fiscal 2021 budget season early this year, the city had a nearly record high $7.5 million in free cash, over $12 million in the stabilization fund, and about $10 million in undesignated funds in the general fund.

“That was the result of having tightened our belts and exceeded our revenue projections for the year,” Donoghue said.

Gov. Charlie Baker’s first proposed budget had a $14 million increase in Chapter 70 aid for Lowell Schools, and a more modest increase in funding for the city.

“We were in the strongest position we’ve been in for years, and that was something we were really happy about,” Donoghue said. “We had actually just made a presentation to the council in late February I believe, where we outlined all these things, and then next thing we knew, pandemic.”

“When COVID happened, that budget was essentially out the window, and we were in a wait and see situation when it comes to state numbers,” Baldwin said.

The city eventually learned that both city and Chapter 70 aid for schools would essentially be level-funded this year, and Donoghue said that was the conservative assumption the city had followed so far in Fiscal 2021, which began on July 1. Since then, the city has operated on a monthly budget, with each month seeing 2020 levels of funding.

Now that the state has confirmed aid will be level-funded, Donoghue said she will soon ask the council to pass a budget for the remainder of the year. A public hearing on that proposal is Thursday.

“So the people think they pay for their own trash and recycling, but the reality is the city is subsidizing solid waste and recycling to the tune of $3 million,” Donoghue said. “Obviously you can’t continue to do business like that.”

She said the city will also be looking at sewer and water fees, and other fees tied to enterprise funds, in an effort to make sure those funds do not require taxpayer dollars either.

“The enterprise funds should run solvent and not have to be funded by the taxpayers,” Donoghue said.

Donoghue said that, thanks in part to the money the city had in reserve, the Fiscal 2021 budget will avoid any layoffs, but only if unions make concessions that the budget is “banking on.”

Donoghue said she was limited in what she could say about how negotiations are going.

“I can’t comment on that, but we’ve had good discussions,” she said. “It’s a huge sacrifice for our employees.”

Asked if options like furloughs are being considered too, Donoghue said “everything is on the table.”

Asked if there could be across the board layoffs if unions don’t make concessions, Donoghue suggested unions that work with the city could see benefits.

“I can’t answer that without saying what’s happening at the bargaining table, but we want to be as fair as possible to those unions that make concessions,” she said.

She said she and other workers in her office, as well as non-union city workers, would be looking at making concessions similar to those the unions are being asked to make, though she said she couldn’t be specific about what form those concessions would take without revealing what is being asked of unions in collective bargaining.

“This is going to apply to non-union people too, to people in my office, me, everybody,” Donoghue said.

Asked about the possibility that the school department will end up with a deficit in their budget, Donoghue ruled out any additional funding for schools, noting that the city is already meeting net school spending requirements, in addition to paying for numerous safety measures in schools.

“That’s not possible,” she said of a bailout for schools.

In terms of whether more help could be on the way, Donoghue said the city is still waiting to hear if congress will pass more stimulus funding, but that “we’re not holding our breath.”

In response to a comment about possibly using even more of the city’s free cash or rainy day fund, Donoghue didn’t hesitate when she said she has no intention of doing so since those funds may be needed in the future too.