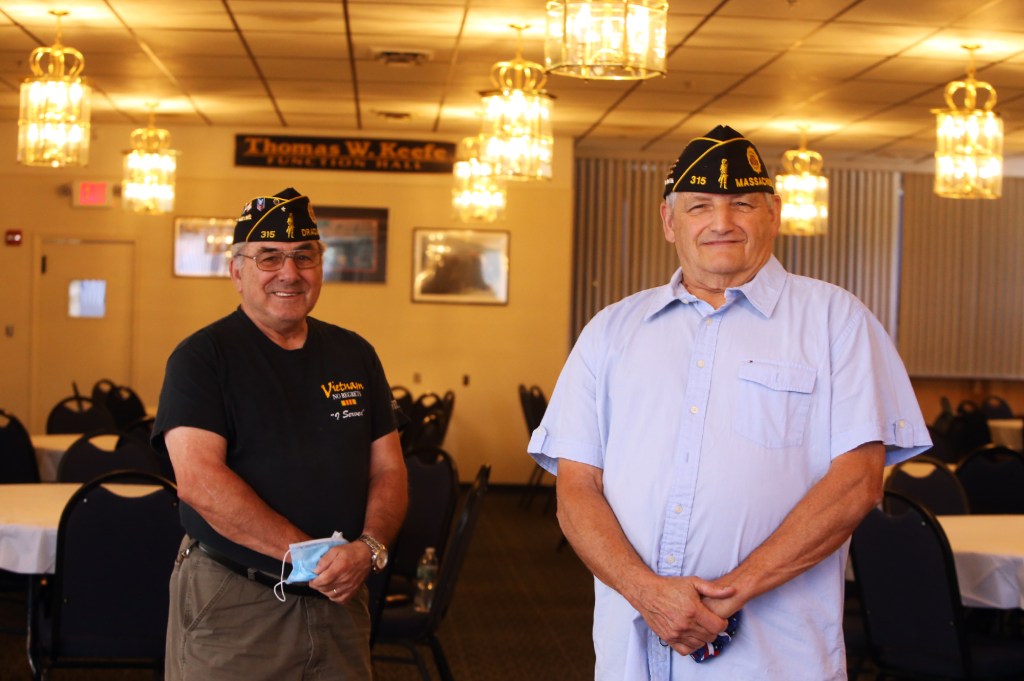 In the third week of February, one of the sprinklers in the building at 574 Broadway Road broke and flooded the entire building.

“We had to close, even though we had books,” says Barry Kuntz, who is adjutant for the post and manager of buildings and grounds.

When he arrived at the building fire crews were already on the scene trying to pump out the water.

The space needed restoration from top to bottom. Ceiling tiles, floors and rugs were all replaced. The building needed new insulation. Computers and other electronics were beyond repair.

“It was time consuming to get all the damage out,” Kuntz says.

And then, he confronted the wall paint in the first floor function room. “People said the paint was Dracut blue, but I called it 1970s blue.”

The paint made the first floor seem dark and unwelcoming.

He approached Post Commander Richard Ducharme who gave him the go-ahead to paint the walls.

So when the other work was done and contractors gone, Kuntz set to work on the walls. But not without help.

Ducharme wants to make sure that Kuntz’s wife, Lorraine, and daughter, Karen LaChance, get a big share of the credit for wielding paint brushes. The amiable Lorraine recently retired from The Sun, where she was employed for many years on the production side of the business.

Kuntz said the family spent five weeks on the job of painting the function hall, which seats 120 people and has a dance floor. First, they primed and then they painted. They were relieved that the blue paint did not bleed through the primer except in a few small spots.

The color of the walls now is a soft white. Dracut blue has not been entirely banished. Shades in the room are blue and white. Shades on windows with exterior views were open on the day Kuntz showed off the results, highlighting the airiness of the walls.

Now that the work is done, the post is waiting to book functions on the first floor again. Renting the hall is a big part of the post’s revenue, both Ducharme and Kuntz say. And, they’ve had to curtail their own fundraisers.

Despite the restrictions, members continue contributing to the community.

As always, they placed flags on the graves of veterans in the town’s cemeteries this Memorial Day and did the “firing”- the gun salute. Some 400 flags were placed this year.