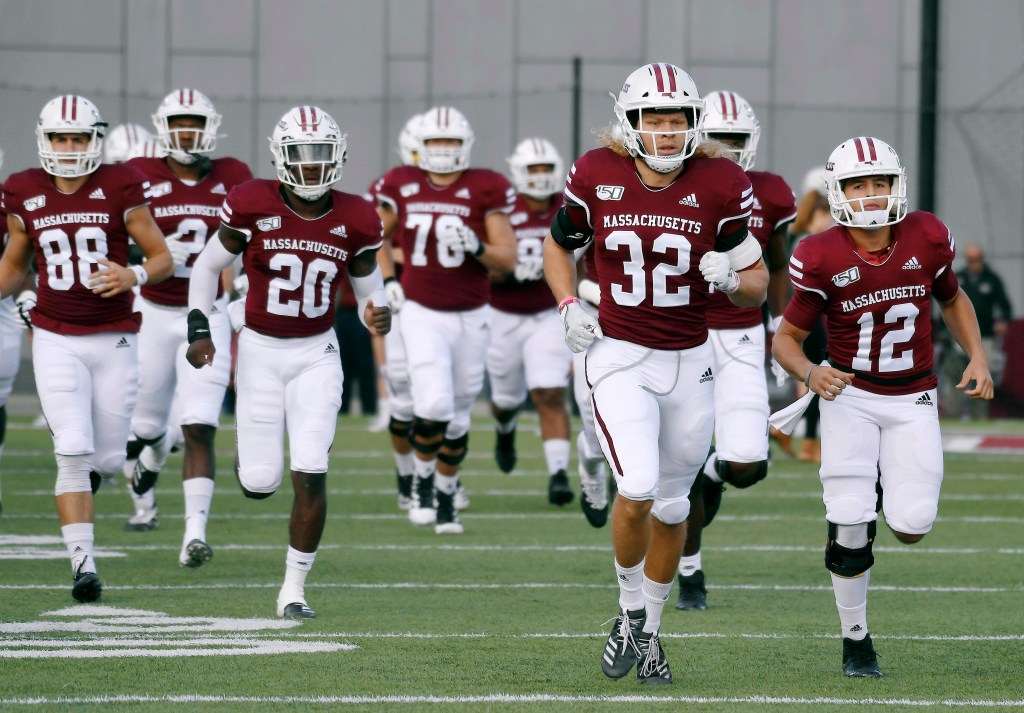 An academic institution that houses a college football program that has won a total of 19 games over eight seasons shouldn’t be in any rush to get that team back to playing if there’s a good reason not to.

The COVID-19 pandemic constitutes a good reason not to. In fact, the idea of anyone playing college football in 2020 is questionable, at best.

However, the powers-that-be at the University of Massachusetts have other thoughts on the matter, thoughts that are the complete opposite of what they were thinking just six weeks ago.

UMass announced Monday that it intends to schedule and play a limited number of football games this fall. The university said the decision was reached following a positive review of the football program’s stringent COVID-19 safety protocols and rigorous testing regimen, in place since players returned to campus in June. The moved reversed a department decision on Aug. 11 to postpone football competition until the spring.

Not included in the university’s press release was a laugh track. It should’ve been, because the whole thing is really quite laughable.

The 2020 college football season already feels like a forced, watered-down sham. Some major FBS conferences — mostly in the south, where the importance of football seemingly ranks as a higher priority than food or clean air — are playing. Some major conferences are not playing.

Then you have the Big Ten, which originally elected not to play this fall, but then reversed course and decided to cram in a season that will start at the absurd date of Oct. 24.

Of course, nothing has changed in regards to the pandemic. Cases are still mounting all over the country, and last I checked football and social distancing are as compatible as oil and water.

But there’s nothing surprising about any of this. This is just a matter of prioritizing football and big money over common sense. It’s one thing for the NFL to forge ahead with a season — players are professionals and paid enormous sums of money to take the risk. College players are amateurs, who are also supposed to be students.

And then you have UMass, which does not carry anywhere close to the cache of Big Ten programs and doesn’t come close to matching the revenue. To put it bluntly, hardly anyone in the state cares about UMass football. Not even the students at the school.

The Minutemen averaged less than 9,500 fans per game in 2019 at their six home games, a brutal showing for an FBS program. Also, since becoming an FBS program in 2012, UMass has a record of 19-77, including last year’s 1-11 campaign. The Minutmen have competed as an independent since 2016.

The school announced it will start playing games in mid-October with development of a competitive multi-contest schedule already underway. All opponents, game dates and sites for the 2020 season will be announced as they are confirmed and will be scheduled based on the ability to meet campus and state regulations.

UMass will not host fans for home games at McGuirk Alumni Stadium.

“The health and safety of our student-athletes, coaches and staff has always been our first priority,” said Director of Athletics Ryan Bamford in the press release. “Since returning to campus in June, the members of our football program have been vigilant in following the policies and safety protocols instituted by the state, our university and athletics department, helping us reach a high level of confidence that we can safely conduct a truncated season this fall. Further, our recent work to generate a schedule in the spring semester, similar to our other fall sports, indicated that fall 2020 provided the best opportunity for our football student-athletes to take the field this academic year.”

Sure, it’s nice for the players to be able to get back on the field and play. I’m certain they’re excited. But with little money to be made by playing, and a high likelihood of losses on the field expected, it’s difficult to see how this a smart decision.

Meanwhile, the majority of the fall 2020 academic curriculum is fully remote and it was reported in August that students taking fully remote classes would not get to live on campus.

I guess things are now safe enough for football, but not in-person learning.

And on top of all that, the UMass athletics department announced last Thursday that it will institute significant cost containment measures by instituting a reduction in work hours and/or furloughs for 57 athletic department staff members.

It all makes the decision to play football and pay for the extensive costs that come with it, such as travel, very head-scratching.