At least 7 dead as storms hit Oklahoma, Texas and Louisiana 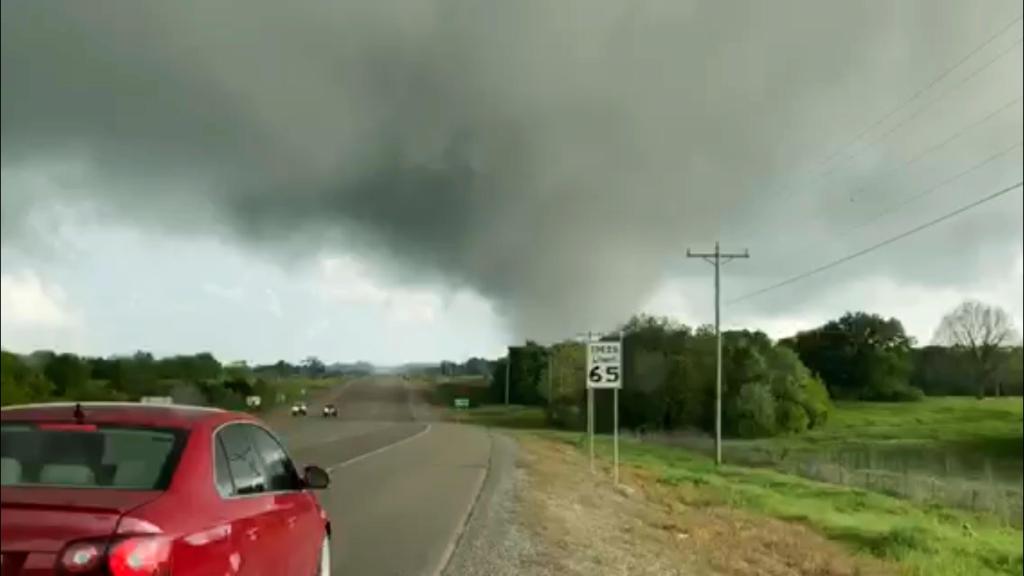 MADILL, Okla. (AP) — Severe weather blew through the South on Thursday after killing at least seven people in Oklahoma, Texas and Louisiana, including a worker at a factory hit by an apparent tornado, a man whose car was blown off the road and a man who went outside to grab a trash can and was swept away in a flood.

More than 150,000 businesses and homes from Texas to Georgia were without power as the severe weather blew eastward, snapping utility lines as trees fell, according to poweroutage.us, which tracks utility reports.

In Georgia, a tornado Thursday swept through the city of Adel in Cook County, tearing off roofs and flipping at least one car and a small plane.

Johnny West, Cook County’s emergency management director, told The Valdosta Daily Times there was damage throughout the county and “heavy damage” in the city. Photos submitted to WALB-TV show trees snapped in half and metal roofing material draped over some utility lines still standing.

Damage was caused by a combination of straight-line winds and the tornado, said Wright Dobbs, a meteorologist with the National Weather Service’s Tallahassee, Florida, office.

There were no reports of injuries or deaths.

Winds peeled roofing material off a church in Alabama and sent an awning crashing onto a car at a gas station. In Adel, Georgia, pieces of metal flew off a building during a possible twister.

About 70 miles (about 113 kilometers) east of Birmingham in Anniston, a firefighter and an emergency medical worker were injured when part of a tree fell atop them while they were rescuing a person who was trapped inside a home by a tree that fell during a storm, Anniston EMS said in a statement posted on its Facebook page. The workers and the resident were all taken to a hospital, but none of the injuries was life-threatening, the agency said.

Forecasters said additional damage was possible from another wave of storms.

Earlier, an apparent tornado killed three people and injured 20 to 30 more in and around the southeast Texas town of Onalaska. Suspected twisters destroyed 46 homes and damaged another 245 in the surrounding area, according to Polk County Judge Sydney Murphy. The judge told the Beaumont Enterprise on Thursday that the dead included a woman in her 20s, a man in his 50s and another man whose age they don’t know.

“It took me 45 minutes to climb through the roof to get out,” said Charles Stephens of Onalaska. He told the Houston Chronicle that he and his wife were holed up in their bathroom when a large pine tree fell through their roof Wednesday night, and he had to use a hatchet free his wife from the debris.

Just outside town, workers were leaving for the day from J&I Manufacturing, which makes trailers, when a suspected twister hit. The body of a worker was later found about a fourth of a mile (0.4 kilometers) away, Marshall County Emergency Management Director Robert Chaney said.

A second person died in Madill when the tornado blew his vehicle off a highway: The body of Chad L. Weyant, 46, of Madill was found in the median and his vehicle in a nearby field, according to an Oklahoma Highway Patrol report.

A Louisiana man was later found dead after a witness saw him try to retrieve a trash can from water near a drainage ditch; He lost his footing and was swept away by floodwaters, DeSoto Parish Sheriff Jayson Richardson told The Shreveport Times.

“There was some pretty extreme flooding here in Mansfield. Water like I’ve not seen in many, many years, if ever,” the sheriff told the newspaper. “Basically the water rose really fast and we had to rescue some people out of homes. I think we had about 20 or so homes that people were flooded in.”

News outlets reported that Becky Carter Roberts, 67, was killed during a storm in Lecompte, Louisiana, 15 miles (24 kilometers) south of Alexandria, but the Rapides Parish Sheriff’s Office didn’t immediately say how she died.

Louisiana State University System President Tom Galligan said the Alexandria campus lost power and water because of the storms. He said the approximately 40 students remaining on campus amid the coronavirus outbreak were being moved Thursday to a nearby hotel until campus services can be restored.

National Weather Service teams will check damage and confirm whether the storms were tornadoes after the threat passes.

This story corrects the location of the death from Woodworth to Lecompte and removes the reference to death occurring on a bridge.