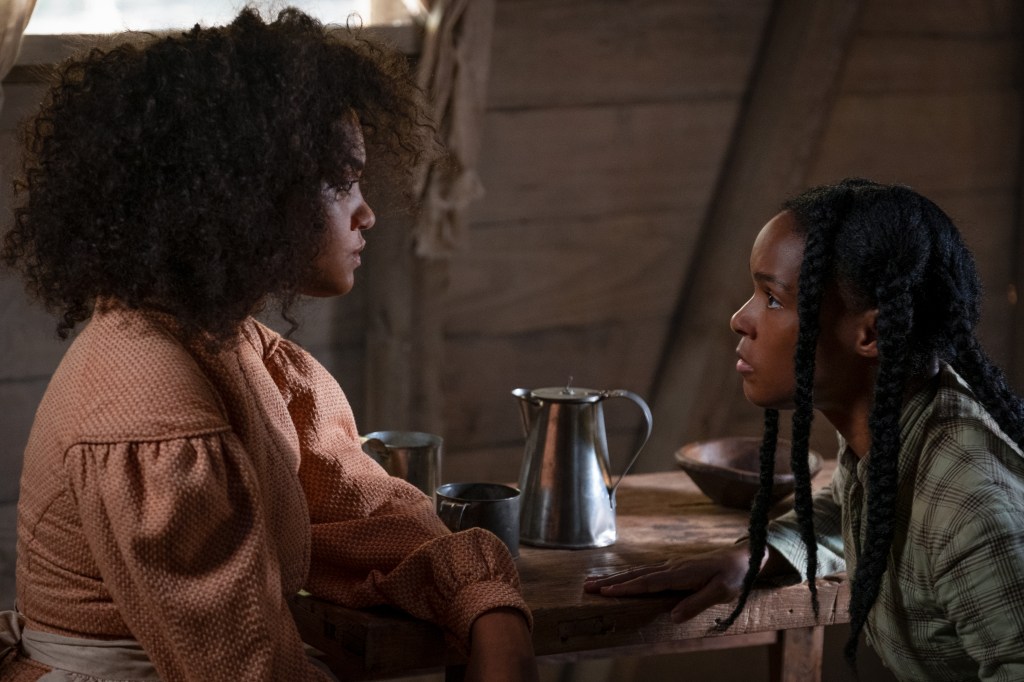 If I told you “Antebellum” combines elements of Academy Award winners “Get Out” and “12 Years a Slave,” I’d have to add, it’s with little of the intelligence, classiness or restraint of those films, which were not known for their restraint.

“Antebellum” begins on a pre-Civil War Southern plantation, which has been commandeered by a platoon of Confederate soldiers led by Capt. Jasper (Jack Huston) and a character known as “the General,” who bunks in a shack with a slave named Eden (Janelle Monae). Eden must provide the General (Eric Lange) with sexual favors against her will. When the action begins, some slaves, Eden included, have been recaptured after trying to escape. One woman is shot to death and her body is put inside the “burning shack” and cremated. The slaves are under orders not to speak to one another while they work. They cannot speak to their masters unless given permission. The mistress of the plantation, Elizabeth (a priceless, villainous turn by Jena Malone), is the captain’s lover.

A rebellious slave newcomer named Julia (Kiersey Clemons) arrives at the plantation. Eden takes her under wing for her protection. At a dinner for the soldiers, the General tells them they have the pick of the female slaves aka “sapphires” to “fulfill every need.” A bashful soldier picks Julia. But the film is weird, often contrived and at times even phony. Slaves speak in modern usage. The soldiers sound like frat boys. The captain swears like it’s 1999, if not 2020.

In scenes set in the present day, Monae plays Dr. Veronica Henley, author of “Shedding the Coping Persona” and a regular face on television, where in one scene she gets into a heated debate with an evil-eyed old white man. She is happily married with a husband (Marque Richardson) and daughter (London Boyce) out of an episode of “The Stepford Wives” or the aforementioned “Get Out.”

Veronica travels to New Orleans for business, where she takes a one-on-one yoga class (a crucial, if also dumb plot point as it turns out) and meets her friends Dawn (Gabourey Sidibe), who is some sort of lifestyle guru, and Sarah (Lily Cowles). In spite of her fame and success, Veronica and her friends are given an unacceptable table at a swanky New Orleans restaurant. Dawn straightens out the situation with lustful glee. A modern-day incarnation of Elizabeth (also Malone) arrives at the hotel and speaks to a maid, calling her “Puddin’,” before borrowing her passkey and breaking into Veronica’s room.

What the heck is going on? You’ll find out. “Antebellum” begins with the oft-quoted William Faulkner line about the past. The film has obvious roots in Jordan Peele’s recent work. “Antebellum” also has roots in Octavia E. Butler’s 1979 slave narrative “Kindred,” a novel ripe for adaptation. Directors and co-writers Gerard Bush and Christopher Renz are veterans of the music video form. Their work is overwrought, superficial and gimmicky to a fault.

Except for scene-stealer Malone, the actors have all been better elsewhere, although Monae and Malone display serious skill on horseback in a final chase sequence. I must also say that the directors found a good use for a statue of Robert E. Lee.