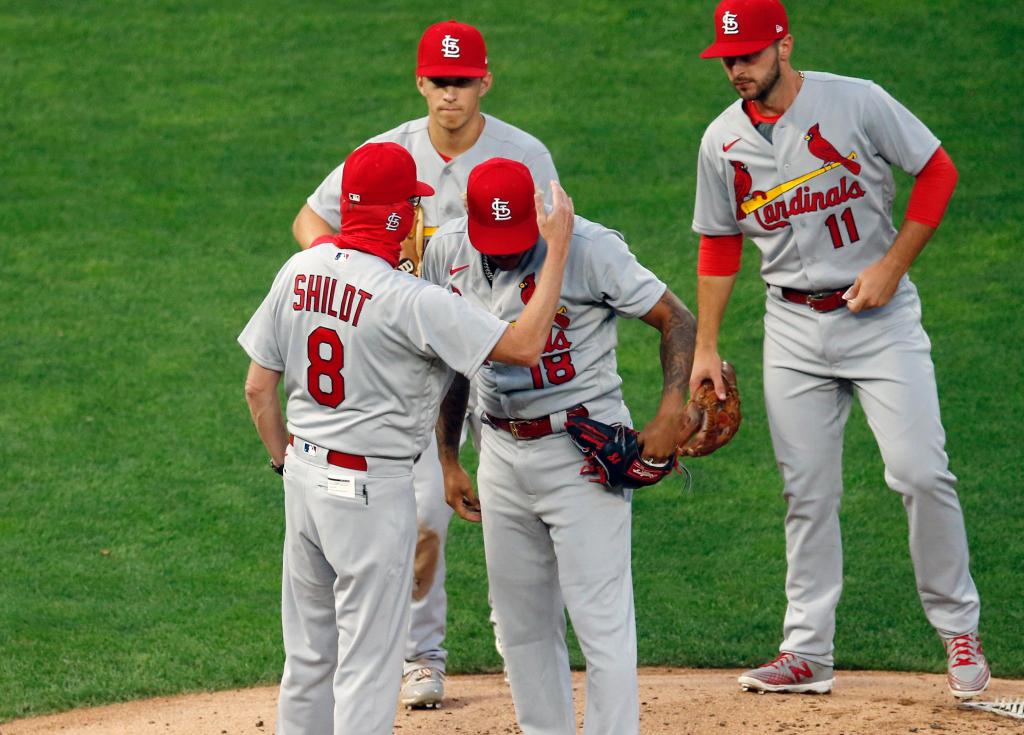 By JAKE SEINER and STEVEN WINE

The coronavirus forced baseball’s 17th postponement in 10 days on Saturday, prompting at least two more players to opt out and casting doubt the league can complete a truncated 2020 season.

A Cardinals-Brewers game in Milwaukee was postponed for the second straight day after one more player and several staff members with St. Louis tested positive for the coronavirus in rapid samples, Major League Baseball said. The staff total of positives was three, a person familiar with the situation told The Associated Press. MLB said results of saliva tests will not be available until later Saturday.

Milwaukee then announced that Gold Glove center fielder Lorenzo Cain will not participate in the rest of the 2020 season.

The Miami Marlins received no new positive results in their latest round of coronavirus testing, MLB said, but second baseman Isan Díaz also opted out.

The Philadelphia Phillies, meanwhile, were permitted to access Citizens Bank Park for staggered workouts beginning in the afternoon.

MLB rescheduled the postponed Phillies-Yankees games of this week for next week, in New York on Monday and Tuesday and in Philadelphia on Wednesday and Thursday. New York’s game at Tampa Bay on Thursday was rescheduled as part of a doubleheader on Aug. 8.

“What the virus has taught us is this is a day-by-day, week-by-week situation that we live in,” Yankees manager Aaron Boone said.

Miami will play a four-game series in Baltimore from Tuesday through Thursday, with one game a doubleheader. The Marlins will be the home team for two games.

MLB said it will reschedule the missed Yankees-Orioles game and Marlins-Phillies series.

The people with knowledge of the Cardinals’ and Marlins’ situations spoke to the AP on condition of anonymity because the tests had not been released publicly.

Two Cardinals players were flagged for positive tests on Friday, forcing the series opener in Milwaukee to be called off. The teams had hoped to resume play Saturday and make up Friday’s game as part of a doubleheader Sunday.

St. Louis learned of its first two positive tests Thursday night from samples taken Wednesday before a game in Minnesota. Players and staff were instructed to isolate in their hotel rooms, and the club said it was conducting rapid testing and contact tracing.

The Cardinals have not been to Miller Park since arriving in Milwaukee, and the Brewers have not reported any positive tests among their players since the season began. Despite that, Cain, a two-time All-Star, informed management that he no longer wanted to participate.

“We fully support Lorenzo’s decision and will miss his talents on the field and leadership in the clubhouse,” Brewers general manager David Stearns said in a statement.

At least 21 members of the Marlins’ traveling party have been infected by an outbreak at the start of a season-opening trip. The team hasn’t played since Sunday in Philadelphia but hopes to resume games next week.

Díaz consistently tested negative while the season was on hold, but he decided to become the first Miami player to opt out. He played in two of the Marlins’ three games before their season was halted.

“This has been a tough week to see so many of my teammates come down with this virus, and see how quickly it spreads,” Díaz wrote on Instagram. “After much deliberation and thought, I have made the difficult choice of opting out for the remainder of the 2020 season.”

Díaz batted .173 as a rookie last year, but the organization has big hopes regarding his potential.

The infected Marlins players and staff left Philadelphia in sleeper buses Friday for Miami, where they will stay together in quarantine. The rest of the team remained in isolation at a hotel in Philadelphia.

Manfred and Clark talked about what needs to be done to finish the season, a person familiar with the conversation said. The person spoke to the AP on condition of anonymity because of the sensitivity of the situation.

The conversation between Manfred and Clark, first reported by ESPN, comes amid growing evidence that the spread of infection threatens to overtake efforts to play ball.

“Some things aren’t looking too good right now, but we have to play up to that point. Players are seeing what can happen,” Houston manager Dusty Baker said.

The Phillies-Blue Jays series in Philadelphia was among two weekend series called off earlier. The Marlins were hit with a virus outbreak in Philadelphia, and both Miami and the Phillies are sidelined for at least a week.

Cleveland players and staff talked about postponing Friday night’s game at Minnesota but played on. The Cardinals had played at Target Field on Wednesday, a day before the Indians arrived.